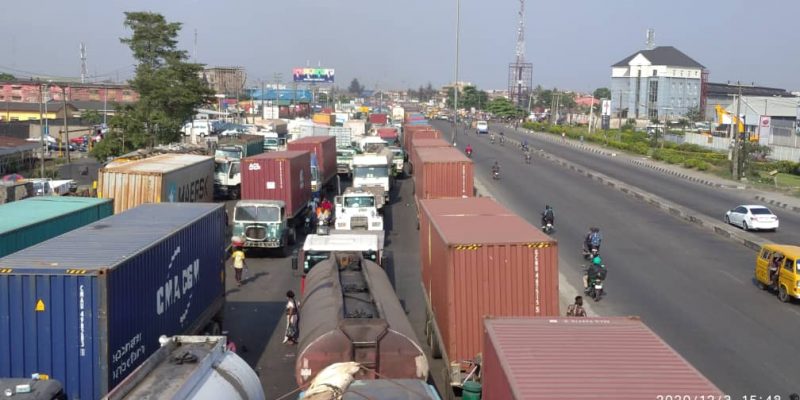 The current road construction has been fingered as being responsible for the delay in the commencement of the use of the E-call up system at the Tin Can Port.

Having experimented with a manual truck-scheduling arrangement for over a year, the Nigerian Port Authority came up with an electronic truck call-up system in February, to solve the perennial traffic gridlock responsible for the delay along the access roads leading to the country’s two busiest ports.

Speaking with our correspondent,  Temidayo Adeboye, Chief Operating Officer of the Truck Transit Park (TTP) said truck drivers find it difficult to access the port owing to the road construction while stating that the design of the Tin Can Port also makes the e-call up a challenging task to accomplish.

In his words, “The e-call up has not worked because of the road construction going on  in that area and because of that, people find it difficult to access the Port.

“Also, if you look at Tin Can, you will discover that it has only three access  gates unlike Apapa that has about nine entry points.

“And these three accesses to the port are  designed for different purposes. The first and second gates are for people while the third entrance is for trucks. So, this has made it difficult and because of that, technology can’t work.

“So when technology fails, you change to manual system. As soon as you switch to a manual system, you have increased the chances of human interference and for people to circumspect the system.

“What they do is for you to stop the system from working because of the free gates and no redundancy on the gates.

“When a gate fails because the gates are designed for various roads of traffic, you can not immediately channel traffic to another road traffic entry point.

“The port took a deliberate decision to create redundancies on all gates. In the next couple of weeks, we should have a triple redundancies on each gates so if one fails , we change to another redundancy.

” By doing so, there will be absolutely no human interference and as soon as the road construction is completed, the e-call up system will start again” he added.