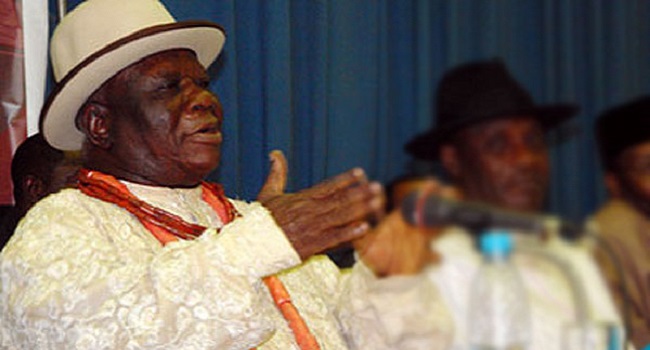 The Governors of the Southern States and elder stateman, Chief Edwin Clark, has rejected the proposed 30 per cent share of the Nigerian National Petroleum Company Limited (NNPC) profit for frontier exploration.

The National Assembly, last week passed the Petroleum Industry Bill (PIB), raising the basins exploration fund to 30 per cent. The bill also made some amendments to the host communities trust fund.
The Southerner governors, after a meeting on Monday in Lagos, hailed the National Assembly for the PIB passage and requested that the ownership of NNPC limited be in the trust of Nigeria Sovereign Investment Authority (NSIA) instead of the Federal Ministry of Finance.
“The Southerner governors’ forum at the end of the meeting held on Monday, 5th July, 2021 reviewed the situation in the country and focused on the current security situation, constitutional amendment, Petroleum Industry Bill (PIB),”
A communique signed by Oluwarotimi Akeredolu, Ondo governor and chairman of the forum, reads.
“The Forum commends the National Assembly for the progress made in the passage of the PIB;
“the Forum rejects the proposed 3 per cent and supports the 5 per cent share of the oil revenue to the host community as recommended by the House of Representatives;
“the Forum also rejects the proposed 30 per cent share of profit for the exploration of oil and gas in the basins.
“However, the Forum rejects the ownership structure of the proposed Nigeria National Petroleum Company Limited (NNPC).
“The Forum disagrees that the company be vested in the Federal Ministry of Finance but should be held in trust by Nigeria Sovereign Investment Authority (NSIA) since all tiers of Government have stakes in that vehicle,” the southern governors said.
Meanwhile, the former Managing Director, Nigeria Liquefied Natural Gas Limited (NLNG), Mr. Babs Omotowa, advised stakeholders to focus on the potentials of the PIB rather than sharing gains.
Moreover, in a letter addressed to the National Assembly, the Ijaw National leader, described the 30 per cent share as “fraudulent and provocative”.
Clark said the entire people of the Niger Delta region, for and on behalf of the host communities, vehemently reject the 3 per cent and 5 per cent of operating expenditure granted to the host communities.