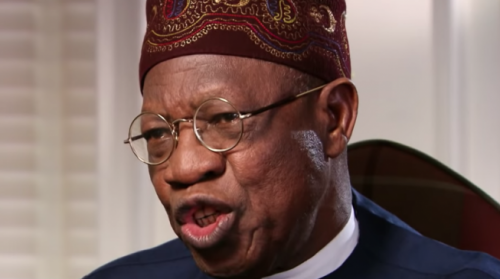 The Minister of Information and Culture, Alhaji Lai Mohammed, on Monday, said the Federal Government spent N60 billion annually  to repair vandalised pipelines in the country.

He made the disclosure in Abuja during a town hall meeting on the protection of oil and gas infrastructure in Nigeria.
Mohammed, in his remarks, said that with oil and gas providing 80 per cent of nation’s budgetary revenues and 95 per cent of foreign exchange earnings, the impact of pipeline vandalism on the economy could only be imagined.
According to him; “today’s town hall meeting on protecting oil and gas infrastructure is very important, considering that the destruction of this infrastructure has socio-economic and environmental implications.
“With oil providing 80 percent of Nigeria’s budgetary revenues and 95 per cent of foreign exchange earnings, one can only imagine the impact of the incessant destruction of oil pipelines on the economy.
“I do not intend to take the wind out of the sail of the experts who will speak on this issue, but with an average of 200,000 barrels per day lost to the wanton damage to pipelines and a huge amount of 60 billion naira yearly to repair and maintain the vandalised points, one can only imagine the impact on the economy”.
He further explained that between January 2019 and September 2020, 1,161 pipeline points across Nigeria were attacked by vandals.
“Apart from the impact on the nation’s earnings, consider also the environmental problems caused by the incessant vandalism, in terms of freshwater pollution, air pollution, soil pollution, etc., and you will appreciate the enormity of the problem.
“With far less resources, the administration has recorded more infrastructural development than was achieved in all the 16 years of the previous administration.
“As this government strives to bridge our nation’s infrastructural deficit, we must do everything in our power to stop the wanton destruction of public infrastructure,” Mohammed said.