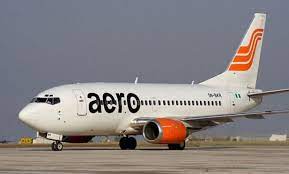 The Managing Director of Aero contractors, Capt Abdullahi Zubair, Mahmood has explained to workers why there have been delay in the payment of January, 2022 salary.

Capt. Mahmood, who assured workers of the airline that their welfare remained paramount in his line of activity,said the Aero contractors like other airlines was passing through hard times as a result of the economic situation in the country, especially with scarce Foreign Exchange (FOREX) issue.

He said the airline had told the staff that January salary will be delayed due to the challenges they had with their aircraft during the festive period.

On delay in salary payment, the Aero boss said that the management informed workers that there will be delay in January salary payment as the airline had it tough during the festive period as they had issues with their machines that led to flight cancelations and the airline made refund to passengers

He, however, explained that over 70 percent of the workers have received their salaries and that it was ongoing and assured them of amicable resolution of all issues

According to him, the airline will bounce back soon as some of their aircraft were being worked on to commence operations

However, it was gathered that Aero contractors workers are set for a showdown with the management of the airline over delay in salary payment.

The workers have alleged that management of Aero contractors has suspended their conditions of service.

It was also learnt that since the arrival of two Airbus aircraft into the fleet of Aero, the airlines fortune has continued to dwindled.

According to them,since the arrival of the Airbus, the management of the airline has withdrawn aero’s aircraft B737 from its hitherto lucrative routes like Sokoto, Abuja and Portharcourt and replaced it with the Airbus

“Before the arrival of the Airbus, it was agreed that they will be deployed on Maiduguri route which was activated but when it arrived, the aircraft started competing with our Aero aircraft on our lucrative routes. As I speak with you, we have not been paid January salary”

The workers threatened to embark on strike Monday if the Aero management failed to address the workers welfare, adding that the committee set up to looking into their welfare has since submitted their report and the management refused to act on it.

The workers also alleged that the Asset Management Company of Nigeria (AMCON) was threatening them of shutting down the airline should they go ahead with their strike.

But in a swift response, the AMCON Spokesperson, Jude Nwauzor dismissed the allegation of shutting down the airline .

Customs lose one officer to unprovoked hoodlums attacks in Enugu