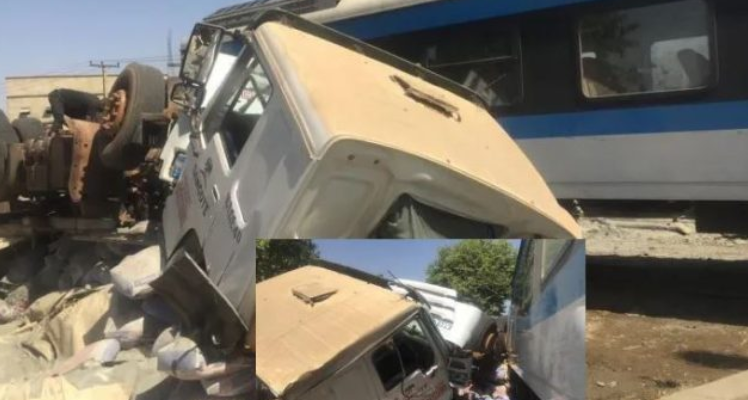 The incident, which happened on Thursday afternoon, squeezed the truck while containers on it were damaged, thereby disrupting entry of export and exit of imported cargoes out of the seaport.

An eyewitness said that the accident was as a result of poor control of traffic at the level crossing inside the Lagos Port complex.

Emeka Okpara said, “The train gave signal that it is approaching the level crossing and while the truck was waiting for the train to exit, someone signalled to the truck driver to start coming since the train has not started moving.

“The driver came down, opened the closed barricade and started moving, by that time, the moving train was already too close.

” The truck head had already escaped, but the body of the truck with the two containers on it was rammed to the wall of ENL along the 1.6 kilometer port access road.

“The container was fully loaded. So the owners of the containers have lost a lot. The NPA officials, Anti-Bomb Square, Customs officers, and Nigerian Railway Corporation officials were on ground.”

Another clearing agent, Chukwuemeka Nwajiuba claimed that the truck driver thought he could outsmart the train driver but, unfortunately, he couldn’t and that led to the accident.

However, NPA staff who spoke under anonymity said the event happened at the railway crossing, saying that the train and the truck, they are already uncoupling them now.

The NPA official explained that the train was bringing containers into the port and it must have derailed slightly and hit the moving truck.

“The truck already had clearance to move because the train had already passed through, we don’t know why the train came back. We are already mobilising cranes to remove the wreckage and normalcy is returning very soon.

“Everybody is on ground trying to sort it out. ABTL has released their cranes to assist, we are trying to get the wagons off, so that the train can move,” the official said.

Speaking to Journalists, the former Vice-Chairman, National Association of Road Transport Owners (NARTO) Dry Cargo Section, Abdullahi Inuwa, said the incident wasn’t the first, adding that the absence of barricade has caused accident in the port.

“What we know normally is if rail is crossing, there must a barrier. If a train is coming, there must be people that are assigned to ensure that they shut the other vehicular  movement for the train to pass,” he said.

Fuel scarcity: Why we withdrew our trucks – NARTO

Why we delay payment of January salary – Aero Contractor MD