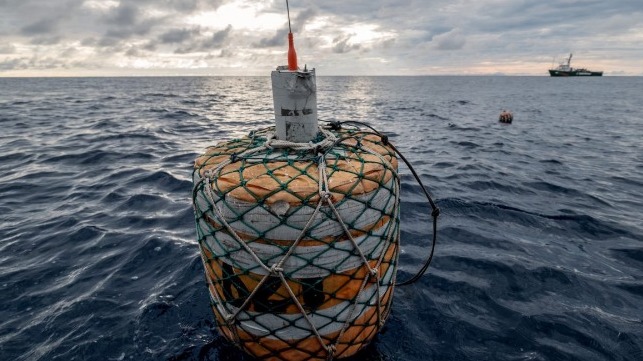 Vandalisation and theft of navigational buoys on the nation’s coastal and inland waters are currently threatening safe navigation for vessels, badges and boats to the nation’s seaports.

Buoys are navigational aides on inland and coastal water that mark and indicate where safe water lies and where vessels should navigate safely within a channel.

it guides, warn mariners as well as identifies where potential hazards or submerged objects may be, or to moor vessels in lieu of anchoring.

Maritime experts have, however, likened buoys to traffic lights and signs guide to drivers on the roads, saying buoys, beacons and navigation lights do the same on the water.

Recall that the Managing Director, National Inland Waterways Authority (NIWA), Dr. George Moghalu had raised the alarm that buoys are being stolen on the nation’s waterways by riverine communities.

He said the stealing is posing navigational danger for boat and barge operators operating in the nation’s seaports.

His words, “We provide these navigational aids and vandals will go and remove them, they vandalise the buoys as well that they can only be effective time in the afternoon and not at night.

“Most of these vandals are from riverine communities because, anyone who can’t swim can’t remove the lighting on the buoys.”

He, however, appealed to leaders in the riverine communities to advise vandals on the consequences of vandalising buoys on waterways.

Also, maritime stakeholders bemoaned the vandalism and theft of buoys lighting, saying it potends danger to safe navigation of vessels, boats and badges on the nation’s inland and coastal water.

Speaking, the former president, Nigerian Shipowners Association (NISA), Aminu Umar, said his company has procured buoys that are stolen on the waterways in two weeks.

According to him, absence of buoys is disaster in the waiting for vessels navigating Nigerian waters as they are navigating blindly.

He said, “absence of buoys is very dangerous for safe navigation because the buoys are what give direction to where ships will navigate through and, if there is no buoy, it is like a driver driving and closing his eyes on the express.

“There is no way he won’t have an accident so, our major issues is that as it stands today, it’s true and even some of the shipowners like me particularly have instances where we have to buy buoys on the waterways to have safe navigation but, we discover that after two weeks, its all gone.”

Umar further disclosed that navigational buoys at the Lagos pilotage district have all been vandalised and stolen by criminals, saying identifying wrecks on the district have been an issue.

“Majority of our navigational channels have no buoys. Very few places in the Lagos pilotage district that you can see buoys existing, especially where there are wrecks that needed indication on where to follow has been removed and sold .

“So, what the NIWA MD said is true and it’s a very dangerous trend which I think there should be a way to stop, to make our waterway safe and it is in the interest of everyone including the immediate community to safeguard the buoys because without the buoys there is no way a vessel can do safe navigation in the channels.

“Also, questions we should be asking is who are buying the buoys, who are the ready made buyers? because if no one is buying, no one will vandalise it so the government should look for those buying the buoys from the vandals because it is really very hazardous vandalising those critical safety equipment.”

“NIWA’s buoys are for ferry movement and  badges to know where to follow since they are for inland waters. This is also to help badges know where to follow because the problem is that the water doesn’t have equal depth everywhere so, there are areas you need to change direction and you know only from these buoys to do  that, you should move at a certain speed, from this buoys.

“You need to reduce your speed to take a turn so, unfortunately all those things have gone and not there anymore but few are there so, it is easier to buy those buoys and I know there are some that technology might have invented that if anyone remove them they become useless and I think the government should look for these type of buoys that if they are inflated and anytime they remove them, it deflated and can’t be inflated again. it’s Important they look at that one,” he advised

Oyung, however, urged the government to ensure strict surveillance of the waterways to end vandalisation of buoys.

According to him, waterways without buoys is like driving without road signs, no traffic lights and they are like artificial traffic wardens, every buoys have definition and significance so, vandalisation means danger for the sector and vessels.

“Vandalisation of buoys shows a dangerous signal. With the way its going, very soon, they will remove the control tower and this means that things have gotten so bad that people are taking desperate action to steal those things that they don’t know how useful it is.

“It’s like going into a maternity ward and stealing incubator that is suppose to be for premature baby. For me, it’s a dangerous trend and we have to thank God we have deep blue project for security on the waterways.

“We have to end vandalisation of buoys and create an enabling environment for people to survive legitimately.

” However, the buoys are very essential because vessels cannot stop like a car if you see a wreck and an obstacle, you have to stop 100meters before you arrive there and if there are no buoys it’s very dangerous and I think something drastic should be done about this trend.

“Water without buoys is like driving without road signs, no traffic lights. Buoys are artificial traffic wardens, with different definition and significance so, it dangerous if they are missing and it’s necessary we have them and the International Maritime Organisation (IMO), that says we should have it as a guide are not stupid so, they should be replaced and secured for safe navigation,” he stressed.