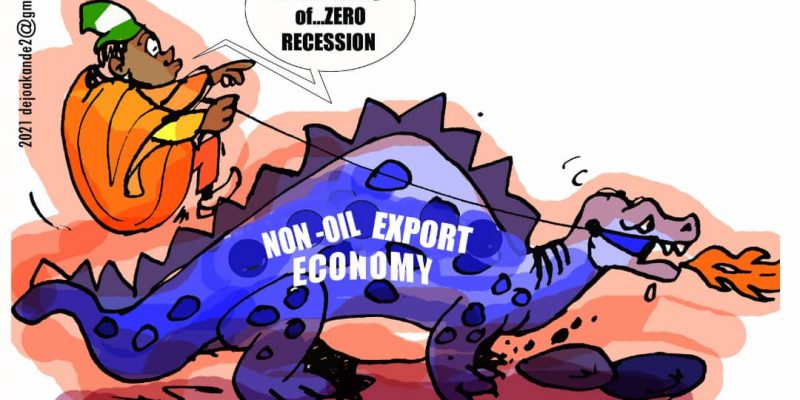 It is an undisputable fact that the economic prosperity of a nation depends on the  level of its export trade.
A nation earns more money by the quantity and quality of goods and services it sells to other nations.

And more money means more infrastructural development, good and quality lives for the citizens and enough to save in foreign reserves.

In other words, a nation enjoys economic prosperity if it produces and sells more than what it consumes.

The flip-side of this scenario is scary and depressing.

A nation which consumes more  than what it produces is a poor nation.

It means its economy is import-dependent and has to sustain its expensive appetite for foreign goods and services at a great cost to the well being of the citizens.

It is however depressing to note that Nigeria unfortunately falls into the latter category.

Through deliberate acts of neglect of the country’s  boundless natural resources by successive governments, the economy of the nation has been on the crutches, supported by excessive imports that put the well being of the citizens at the mercy of the exporting countries.

We are even more perturbed that unlike some  of the so called poor countries which understandably lack enough resources which they can leverage on, Nigeria, through most of its rapacious and visionless  leaders ,simply failed to develop the  non-oil exports, or pretend to do so.

Since the discovery of oil in the country which has ironically brought more pains than gains, the country’s non-oil sector, despite the pretentious and half-hearted commitment of past leaders to develop it, has largely remained in comatose,  thus making Nigeria a mono-product economy.

It is also more disheartening to note that some countries who are not as well endowed in terms of  natural resources as Nigeria, are prosperous , using judiciously to create wealth the few resources nature has endowed them with.

However, we note with exhilarating heart that the present government,  probably due to the bleak future for oil exports, has given more than passing interest to the development of non-oil exports,  especially agricultural products.

Since the inception of the present government,  we have noticed increased activities in the non-oil sector.

We particularly note the renewed interests of people in agricultural economy due to the increased government patronage.

This, to our mind, will change our consumption pattern by stimulating interest in home-grown agricultural products.

The National Bureau of Statistics(NBS) said in its report that  Nigeria recorded an export rise of 73.5 per cent in the second quarter of 2017 compared with the same quarter of 2016.

We believe the statistics for the subsequent years would not be less encouraging.

The rise was attributable to the diversification efforts of present government which now places particular emphasis on non-oil exports.

We laud this initiative despite the fact that crude  oil exports still account for our major earnings.

The high tempo of export activities at the ports is also an indication of the seriousness of the present government to boost the non-oil exports, especially agricultural products.

The exports seat of the Apapa command of the Nigeria Customs service, which is the largest exports transit point in the country, has been posting impressive statistics in the last five years.

In as much as these efforts are commendable, we urge the government to do more by giving increased financial support and enabling environment through stimulating policies and programmes that would further boost the sector.

We also urge the government to pay equal attention to other areas of export trade as it currently pays to the agricultural sector .

We note that the manufacturing sector, which is another critical plank on which the  non-oil sector rests,  is not being given as much attention.

The sector is still in comatose as it lacks government attention it deserves.

Our Export Processing Zones are in lamentable conditions bereft of activities that could attract  local and foreign investors and stimulate economic growth.

An Export Processing Zone (EPZ) is a specified type of Free Trade Zone (FTZ), set up generally in developing countries by their governments to promote industrial and commercial exports.

Most developing countries leverage on this scheme to attract and encourage both local and foreign investors for manufacturing activities to stimulate economic growth.

Unfortunately,  Nigeria does not leverage on this scheme which it established through Decree No.26 (now an Act of the parliament) of 1976.

It is disheartening to note that less than 14 out of more than 34 Free Trade Zones  (FTZ) in Nigeria are actively operating.

The most heart -rendering of all of these was the  multi-billion naira, gigantic TINAPA FTZ in Calabar which is now in ruins.

Just like TINAPA, successive  government neglect of our EPZs has crippled the manufacturing sector in the country.

The few that are functional lack basic amenities such as good network of roads,  power supply and enabling environment that will attract local and foreign investors.

We however commend the present government for the increased budgetary allocation to Nigeria Export Processing Zones Authority  (NEPZ).

This is a sure sign of the recognition of the importance of EPZs by this government  to the economic growth of the country.

This platform believes more could still be done in terms of provision of incentives that would stimulate the interests of local and foreign investors,  who presently are attracted to other West African countries such as Ghana.

We also call the attention of government to some of the barriers against export trade, through the  airports and especially seaports where the Nigeria Customs Service, terminal operators and shipping companies place exorbitant but often illegal charges on exporters which discourage export promotion.

We call on government to intervene in this matter so that all the efforts to stimulate the sector will not be flittered away on the altar of greed of these service providers.

We also notice that lack of knowledge of export procedures by some Nigerian exporters make their goods unsellable in the international market.

The Nigeria Export Promotion Council (NEPC)should be alive to its responsibility by engaging in enlightenment programmes for our local exporters on processes and procedures of the trade.

Training on goods preservation,  packaging and quality exports should be conducted for Nigerian exporters to ensure that Nigerian exports are patronised.

With the positive attitude of the present  government towards growing non-oil exports,  we believe that the economic fortunes of the country will change for the better if these efforts are sustained and improved upon.

As a result, the country status as a consuming,  mono-product economy will transit to productive economy that will lead to prosperity of the nation and its people.