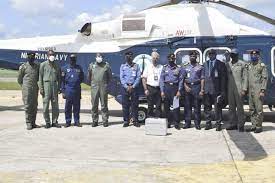 The Navy, which made this known through it’s spokesman, Mr. Suleman Dahun, said it has made giant strides in the recapitalisation of its fleet, with dozens of vessels commissioned since year 2020.
While stating that more are still on the way, Dahun explained that the current acquisitions, came as the agency attempts to deal with a continued spate of pirate attacks in the Gulf of Guinea.
He added the move would go a long way towards dealing with oil thieves and other criminal activities in the Niger Delta region.
Dahun, pointed out that France’s Ocea shipped the third and fourth C-Falcon interceptors (P273 and P274) to the country through cargo ship earlier in April, saying that the first 2 (P271 and P272) were delivered at the end of 2020.
“Over the last eight years, Ocea has supplied one FPB 98 Mk I patrol vessel, eight FPB 72 Mk II and two FPB 110 Mk II patrol vessels to Nigeria. Ocea also won three tenders for two additional FPB 110, one OSV 190 SC-WB and four C-Falcon vessels.
“The two additional 35-metre FPB 110 boats were delivered by the end of 2020. In September last year, Ocea launched a new hydrographic survey ship, the Lana, which is expected to be delivered later in April 2021.
“The Nigerian Navy is also expecting four 17 metre Suncraft Manta boats from Malaysia (these were built in 2020) while Damen is set to deliver two 40 metre fast patrol boats. The Damen boats are being built at its facilities in Vietnam.
“On the smaller end of the scale, Suncraft has supplied 25 of its 9.5 metre long rigid-hulled inflatable boats (RHIBs) and 15 of its 8.5-metre RHIBS. Another 90 small boats are either expected or have been delivered to the Nigerian Navy,” he said.
The security agency further highlighted that the acquisitions are locally manufactured vessels, as indigenous construction of a third 43-metre Seaward Defence Boat and two logistic supply houseboats at the Naval Dockyard Limited and Naval Shipyard Limited, were in progress.
According to the Nigeria Navy; “these vessels were expected to join the service in the first quarter of 2021. In addition, about 170 riverine patrol boats were built in Nigeria and more acquisitions are planned.
“On the aerial side, the Nigerian Navy has taken delivery of a single AW139 helicopter from Leonardo Helicopters and is in the process of procuring 14 unmanned aerial vehicles, to enhance response capability, through South Africa’s Epsilon and CACTIC in China.
“These are expected to be delivered within the current year. Over the last six years, the Nigerian Navy has acquired a total of 378 platforms, including 172 patrol boats, 114 RHIBs, two Seaward Defence Boats, 12 Manta class boats, three Whaler boats, three tugs and two barges.
“Other platforms acquired included 22 fast attack boats, 14 UAVs, four helicopters, 14 River Town class boats, 12 houseboats and four capital ships”