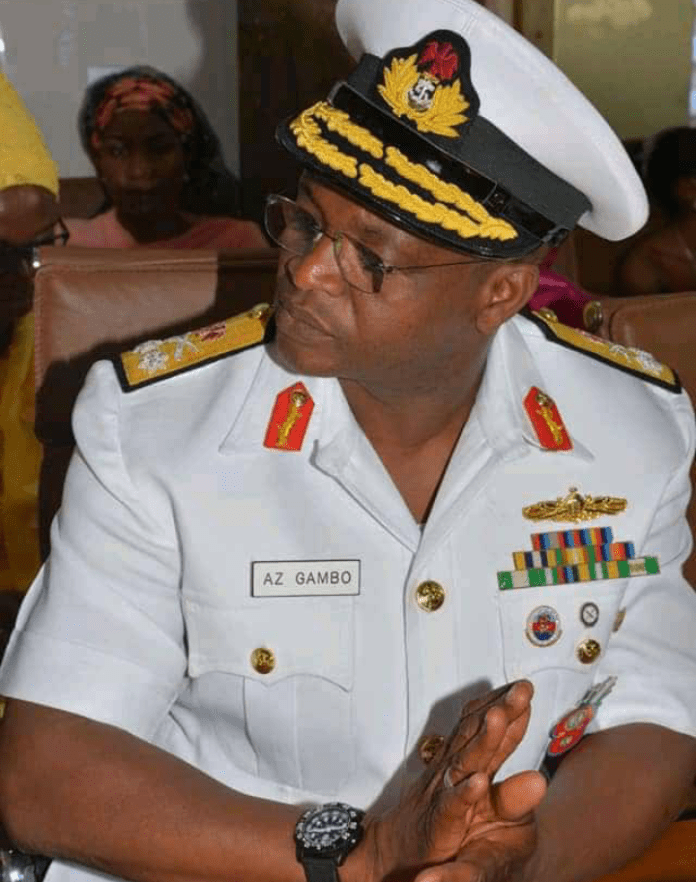 — vows to flush out corrupt elements from the Navy

The newly appointed Chief of Naval Staff (CNS), Rear Admiral Awwal Zubairu Gambo, has restated Navy’s commitment to getting rid of criminal elements in the country, especially crude oil thieves, amongst others.

He also said he would introduce policies and measures that would sanction Nigerian Navy officers who connive with economic saboteurs, drug traffickers/barons, bandits and kidnappers to commit any criminal acts.
Gambo also advised the men and officers of the agency to avoid any act capable of tarnishing the image of the Nigeria Navy.
He pointed out that such acts would be met with heavy sanctions as well.
Gambo, who took over from Vice Admiral Ibot Ekwe-Ibas, in his remarks at his first meeting with principal staff officers, flag officers commanding and commanders of autonomous units of the Nigerian Navy at Naval Headquarters, Abuja, reiterated that any personnel that exhibits high integrity and positive attributes that portray the Navy in good light shall be rewarded handsomely.
He stated that his ambition as the new Naval chief is to use every available opportunity in terms of national location, technology, training, teamwork and synergy to re-energise the Nigerian Navy.
Gambo also added that the above-mentioned attributes would enhance the Nigerian Navy to be well-motivated and ready to discharge her constitutional mandate and other tasks assigned them in fulfillment of national security objectives.
“The current administration would ensure personnel welfare is accorded high priority towards enhanced patriotism, integrity, productivity, innovation, commitment and dedication.
” It will also focus on human capacity development through result-oriented training for enhanced professionalism and strengthening logistics support and maintenance capabilities to sustain equipment serviceability and platform availability,” Gambo said.
He maintained that he will introduce the culture of self-sufficiency through sustained investment in research and development and prudent management of resources as well as promote inter-service cooperation.
Gambo added that the administration will forge strategic partnerships with MDAs, credible maritime stakeholders and partnership engagements with international partners.
On incidents of piracy and sea robbery on Nigerian territorial waters, he said: “All commanders should sustain aggressive clearance operations to make the sea non-conducive for militants, cult members and pirate camps to operate