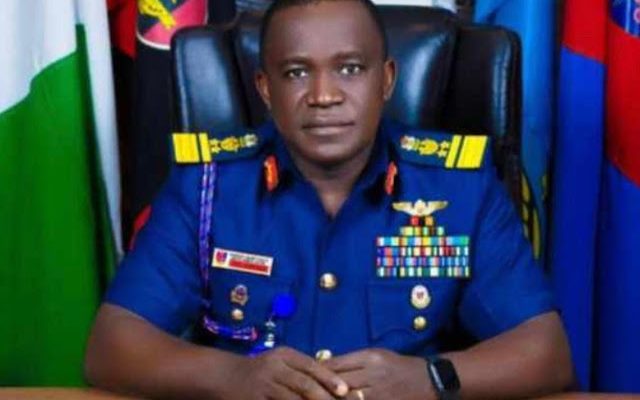 In a bid to douse the conflicting details of the cause of crash of the  Nigerian Air Force (NAF) Alpha Jet, Air Marshal Isiaka Amao, has said that the  details of the  tragedy would soon be made public.
Air Marshal Amao however reiterated that the aircraft was not shot down by the Boko Haram terrorists but other factors that the NAF authority will soon disclose.
He stated this on Sunday while having Easter lunch with troops of the Air Taskforce Operation Lafiya Dole in Maiduguri, the Borno state capital.

He assured that the Air Force was working hard to retrieve the crashed jet and the pilots on board.

“On the issue of of the crashed NAF Alpha Jet, which was declared missing on 31st March 2021 after losing radar contact, let me state clearly that the videos being circulated on social media alluding that the aircraft was shot down are false.

“From critical analysis of all available evidence, it is obvious that the air accident was caused by other factors which will be soon made public. You are all aware of the efforts we are making to rescue our pilots and recover the crashed aircraft.

“We are using this opportunity to brief on the next line of action and also to intensify the operation towards rescue of our missing pilots and recovery of our crashed aircraft.

“The Theatre Command, the Air Force search and rescue team as well as Air component are doing a lot to ensure that we get back those pilots and the aircraft that crashed.

” Surely the aircraft will be recovered. We will continue to sustain the efforts,” the Air Chief said.

He said the sad situation notwithstanding, now, more than ever before, is the time that NAF must show strength, determination, be undeterred and unrelenting until the entire Northeast is rid of terrorists and criminal elements.

He assured the troops that the entire nation was behind them and supportive of their efforts, hence the need for all to remain focused.

On the Easter lunch with troops, Air Marshal Amao said the event provides an opportunity to not only bond with frontline troops, but also to promote comradeship and regimentation in the service.

“I am here to deliver President Muhammadu Buhari and Chief of Defence Staff (CDS) message, thanking you for your sacrifices toward ensuring that peace returns to the Northeast.

“Unfortunately, we are observing this year’s Easter lunch in sober mood as we are still searching for two of our colleagues who were involved in an air crash on 31st March 2021 and are still missing.

“This makes the event more significant as we use the occasion to also remember our colleagues who have paid the supreme price in the service of our fatherland.

“We remember their sacrifices today, even as we celebrate the ultimate sacrifice that the Easter season signifies. May their souls continue to rest in peace and may we find our colleagues who are still missing in action,” the CAS prayed.

How much is NIMASA’s  Certificate of Competency Worth to Nigerian Seafarers?