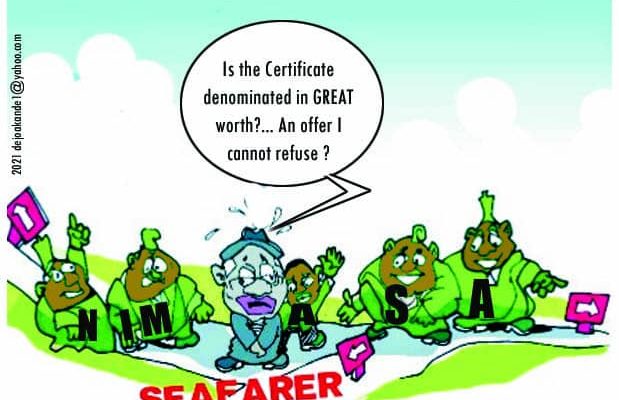 Seafarers or seamen are essential part of shipping activities in a maritime nation and form the nucleus of its human capacity and shipping development.

They give muscle to the shipping capacity of a country which, aside from owing vessels, must have the ability to crew them.

Most maritime nations of the world such as Philippines, Russia, India and the rest make fortunes from their seafarers whose services they export to man vessels all over the world.

In actual fact, Philippines get the larger chunk of its foreign exchange from its vast numbers of seafarers whose services are greatly sought due to their competence and high quality.

So, seamen are the crew members of vessels such as, Masters, deck officers, Marine engineers and the likes.

Their operations are governed by international standard which prescribes minimum qualifications and level of competency.

Guided by set standards of the International Maritime Organisation (IMO), the maritime administration of each member state or an accredited body licenses seafarers through sets of trainings and certification  in accordance with the International Convention on the Standards of Training, Certification and Watchkeeping for Seafarers (STCW) which prescribes the global minimum standards for seafarer training and certification.

The Certificate of Competency is then issued to successful seafarers.

In Nigeria, the body charged with such responsibility is Nigeria Maritime Administration and Safety Agency (NIMASA), the maritime regulator in the country.

However, the most worrisome aspect is the quality of training and certification conducted by NIMASA for our seamen.

We are as worried as other industry stakeholders about the Certificate of Competency issued by NIMASA to our seamen.

We find it curious that since inception of the defunct National Maritime Authority (NMA) in 1987 through its metamorphosis into Nigeria Maritime Administration and Safety Agency (NIMASA) in 2007 up till this present moment, the agency still finds it convenient to issue Certificate of Competency that has limited scope and influence.

The CoC issued by NIMASA has a clause Near Coastal Voyage (NCV) which experts say restricts the scope of operations of the holders.

By implications, the holders of NIMASA’s CoC cannot work beyond the country’s coastline and on board vessels above 3,000 gross tons because of the restrictive clause which places a ceiling on the area of their operations by the country’s maritime administration.

This has not only limited the capacity of our seamen, especially those who holds NIMASA’s CoC, to work on bigger ocean-going vessels, but has equally made them unattractive to foreign vessels owners.

We find it intriguing why NIMASA decided to place such restriction on the sphere of influence of our seamen.

More amusing is the refusal of the regulatory body to remove this controversial clause despite the agitations of Nigerian seamen.

The seamen, worried by the debilitating effect of the clause on their market value, have mounted pressure on the maritime administration since the tenure of Ferdinand Agu, who was the Director General of the defunct National Maritime Authority between 2000 and 2005.

We find it quite unsettling that up till the present moment, NIMASA is still playing the ostrich with the vexed issue.

This platform finds it discomforting and disconsolate to observe that while other countries which previously had similar clause on their CoC had expunged it, NIMASA has not found it expedient to remove the restriction. We can’t fathom why the agency chooses to play with the career of our seamen.

The restriction placed on our seamen by this clause has similarly limited their source of income.

They can only work on coastal vessels as no ocean-going vessels will engage their services.

Ironically, NIMASA’s CoC is reputed to be one of the most difficult and expensive to get but not acceptable in other countries.

What is the worth of such certificate that is restricted in scope but expensive to secure?

Of what financial benefit will it be for the holders who, after much toil and sweat, could not use it to get lucrative international jobs?

We are least surprised then that most Nigerian seamen prefer to get certificated in other foreign countries, especially Ghana whose CoC is said to be globally recognised.

We find distasteful the bureaucratic bottlenecks which the process of expunging this offensive clause is subjected to by NIMASA.

The agitation of the seafarers for the removal of the restrictive clause has always been met with a banal response by NIMASA that it was consulting with its legal department to effect the change.

We find this rather unimaginative reason for the delay in view of the dire consequence of such action.

The continued reluctance of the agency to effect the change despite the respite it will give to the seafarers gives credence to the insinuation that the quality of training and certification exams conducted by NIMASA is suspect.

We are constrained to align with this notion given the high level of decay which the Maritime Academy of Nigeria (MAN), Oron, has sunk in terms of curricular defects and infrastructural gaps.

The apex maritime institution is the host institution for training and certification of seamen for CoC as conducted by NIMASA.

Little wonder the cadets who passed through this pioneer maritime training institution are said to be of poor standard, a reason the incumbent Rector of the institution initiated a far reaching reforms to reposition the academy.

We then shudder at the quality of training which our seamen acquire.

We are also uneasy over the fate of our cadets who passed through the academy.

We are however comforted by the cheering news emanating from MAN, Oron which has undergone tremendous reforms in infrastructure and curricular activities.
The present administration of the training institution has given hope to the cadets and seafarers through its innovative developmental projects that we hope will enhance the man power development in the industry.

However, the continued  issue of restrictive certification of our seamen is another screaming testimony of the parlour state of human capacity development in the maritime industry.

It also reveals the stalled growth of shipping development in the country given the value of CoC issued by NIMASA.

We call on the Federal Ministry of Transportation to prevail on NIMASA to start the process of removing the limitations placed on our seamen’s sphere of operations to make them marketable.

If other countries which have similar restrictive clause could remove it, Nigeria has no excuse holding on to such clause on its CoC.

The continued delay in doing the needful in this regards is harmful.

In the first instance, our seamen will not be able to market their skills and expertise to the international markets, thus depriving them of unrestricted sources of income.

It will also deprive government the revenue accruable from the training and accreditation process that leads to the issuance of the CoC as most of the seafarers will prefer to go abroad to get certificated.

The development will also incapacitate the efforts to grow our human capacity in the maritime industry.

Nigeria,  unlike Philippines and other developed maritime nations, will not have the opportunity to export the services of its seamen for the desirable foreign exchange.

NIMASA should as a matter of urgency, change its certification template to make its CoC valuable and widely acceptable.

Some distraught stakeholders, who are frustrated by what they described as the incompetence of NIMASA, have advocated for the establishment of an independent body to take charge of the training and certification of seamen in line with international procedures.

In as much as we acknowledge their frustration, we believe this duty is still within the statutory responsibility of NIMASA and we see no reason yet why it should be taken away from the agency.

The agency only needs to be empowered and be creative in growing the industry.

We join thousands of our seamen who are agitating for the removal of the offensive clause from their CoC to enhance their market value in the international market.

Until this is done, we dare say NIMASA’s Certificate of Competency may not be worth more than the paper on which it is printed.

NAF set to release cause of jet crash