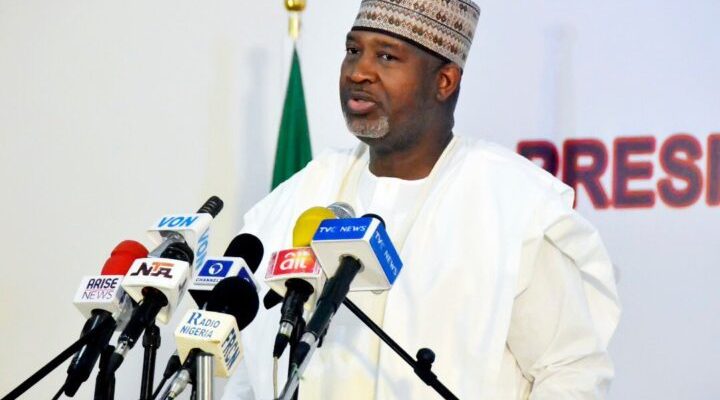 The Minister of Aviation, Senator Hadi Sirika, had said that the nation’s airlines are owing various Federal agencies to the tune of N37 billion.

Sirika, made this known at the weekly ministerial press briefing organised by the presidential communication team at the presidential villa, Abuja.
He noted that the debt owed agencies, includes; Federal Airports Authority of Nigeria (FAAN), Nigerian Airspace Management Agency (NAMA), Nigerian Civil Aviation Authority (NCAA) amongst others.
Sirika revealed that Arik owes about N13 or N14 billion, while Bi-Courtney is owing Federal Airports Authority of Nigeria (FAAN) about N14 billion.
He added that for the past 13 years since Bi-Courtney began operations, it has not remitted a single dime to them as stipulated in the agreement.
Sirika said the government had been cautious in demanding for the payment, mindful of how the media and Nigerian public might react, but vowed that the government would go after the airlines to make sure that they pay what they owe.
“In fact, the service providers in our system, FAAN, NAMA, said  these guys are owing us, we should take the money from the money being given as palliatives.
“We said no but the intent of President Buhari is to ensure that he cushion the effect on businesses. Let us find a way of surviving, and let them take the money. So we would have taken the money and left them with nothing and we stay with nothing.
“So, this brings to the question on the money owed the parastatals. It is about N37 billion that they are owing, especially, Arik, the culprit.
“I know they’re owing us about, N13, N14 billion.
“If you’re owing government, you are owing FAAN, the Bi-Courtney is owing about N14 billion as at the last count. It has not paid a single dime since the time he started to run the terminal building.
“And we have not ceased giving him, electricity, water, fire cover, and so on and so forth. He hasn’t paid a dime for 13 years.
“And if we go to shut his doors, media, of course, and Nigerian people will say we’re killing businesses but he is killing our services too, because we have to have that money to provide for that toilet that you’re looking in Lagos airport.
“Most of these are living by their IGRs and so, we need the money but we will go after the money,” he said.
Sirika, however, maintained that Nigeria will begin the operation of a new national air carrier in the first quarter of 2022.
According to him; “I’m happy to say, we discussed with the high and mighty. We discussed with Boeing, with Airbus, we have reached some agreements.
” We discussed with airlines like Qatar, and many other airlines. We will have this timeline in 2022 by the grace of God. And we’ll start with the domestic, you know, escalating into international.
“And we are partnering with many in the airline industry focused either weight capacity and high capacity to be produced by either Boeing or Airbus.
“We believe that this is the best thing for Nigeria and for Nigerians and for sure, the market is there”.