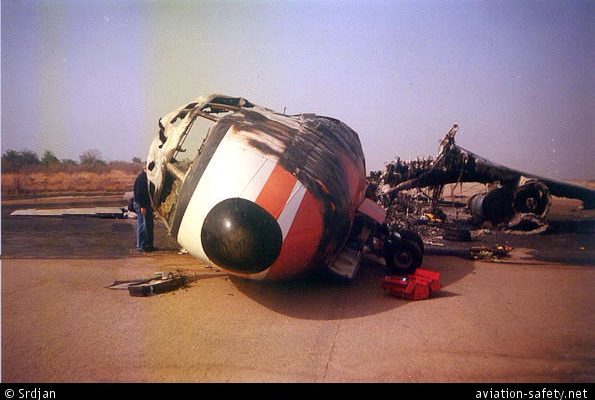 11 years after Chachangi airline crashed in Kaduna killing 45 persons onboard, the Accident Investigation Bureau – Nigeria (AIB-N), has released the cause of the crashes.

The Bureau yesterday identified unserviceable runway lighting as factor responsible for one of the crashes that happened in the country.

Speaking during the release of investigation report of eight aircraft, two of which are foreign registered aircraft from Turkey and the United States all occurring between 2010 and 2019 and issuing of  nine safety recommendations to avert future occurrence, commissioner of AIB-N, Engineer Akin Olateru said safety recommendations are addressed to the regulatory body NCAA, the affected airlines and the Federal Airport Authority of Nigeria (FAAN) among others.

According to him, one of the causal factors of the incidents was as a result of unserviceable runway light at Runway 21, recommending that Federal Airports Authority of Nigeria (FAAN) should ensure serviceability of DNPO runway lighting systems during all operations.

Another safety recommendation was to Turkish Airlines Inc. that the airline should ensure flight crew adherence to provisions of the Standard Operating Procedures (SOP), as contained in the Turkish Airlines Flight Crew Techniques Manual vis-à-vis landing techniques.

Others are the report on the serious Incident involving a B737-200 aircraft with nationality and registration marks 5N-BIF owned and operated by Chanchangi Airlines, at Kaduna Airport, Runway 05, Nigeria on 20th of August, 2010, as well as a Bombardier DHC-8-Q400 aircraft owned and operated by Arik Air Nigeria Ltd with registration marks 5N-BKX which occurred en route Kotoka International Airport, Accra, Ghana on 6th March, 2018.

The final two reports are on the Serious Incident involving an Airbus 330-343 aircraft operated by Turkish Airlines Inc. with registration marks TC-LOL, which occurred at Port Harcourt Intl. Airport on 31st December 2019 and the  Serious Incident involving Boeing 737- 300 aircraft 5N-BUK operated by Air Peace Limited which occurred at Murtala Muhammed Airport, Lagos on 15th May, 2019.