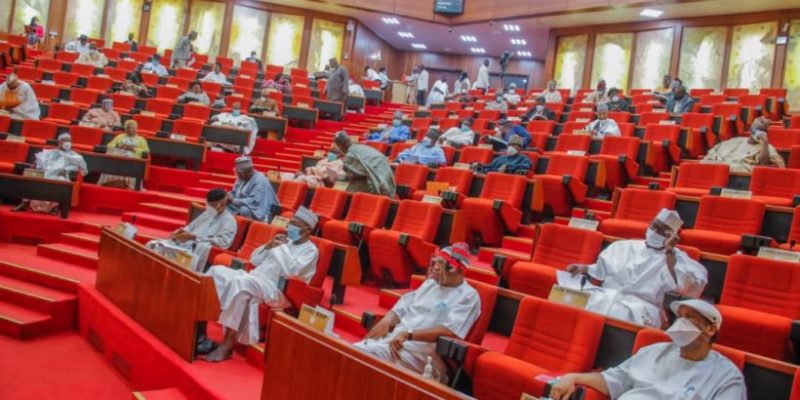 The Senate and the House of Representatives, on Tuesday, resolved to intervene in the diplomatic row between Nigeria and the United Arab Emirates (UAE) following disagreements between both countries.

The decision to wade into the dispute was reached in the Senate sequel to a point of order by the Senate Minority Leader, Enyinnaya Abaribe, during plenary.

Mr Abaribe, while relying on Orders 42 and 52 of the Senate Rules, recalled that in December 2020, a Memorandum of Understanding was signed between Nigeria and the UAE to provide a platform for both countries to engage each other bilaterally.

Giving insight into the circumstances surrounding the disagreement, the lawmaker noted that in February 2021, the federal government stopped the UAE national carrier, Emirates Airline, from subjecting Nigerian travellers to additional rapid antigen test as against its stipulated negative PCR test at the Lagos and Abuja airports before departure.

Mr Abaribe said the Emirates Airline then shut down flights to and from Nigeria owing to the disagreement between it and the aviation authorities on the propriety of subjecting passengers travelling from Nigeria to an emergency COVID-19 protocol.

He, however, said after an interface between the authorities of the aviation ministry and Emirates Airline, flights resumed but the airline continued to conduct tests for passengers before departure from Nigeria, a development that the federal government frowned at and thus suspended the airline from flying in Nigeria.

Mr Abaribe further expressed concern that, “there are allegations that hundreds of Nigerians living in UAE are losing their jobs on account of the refusal of the authorities to renew their work permit which offends the letters of bilateral agreements which both nations are signatory to.

“Worried that there are speculations that the refusal by the UAE authorities to renew work permit for Nigerians living there is a calculated attempt to pressure the Nigerian Government into accepting their conditions of service for their national airline that may have lost humongous revenue from the Nigeria route.

Accordingly, the upper chamber in a resolution mandated the Senate Committees on Foreign Affairs, Presidential Task Force (PTF) on COVID-19 and National Security and Intelligence and Interior (Immigration Service) to interface with the Ministry of Foreign Affairs, and National Intelligence Agency (NIA) towards resolving the crisis and report back to the Senate within two weeks.

On its part, the House of Representatives resolved to set up an ad hoc committee to intervene in the diplomatic row.

The resolution was  sequel to a unanimous adoption of a motion by Ndudi Elumelu (PDP-Delta) at plenary on Tuesday.

Moving the motion earlier, Mr Elumelu said Nigeria and UAE have had a positive diplomatic relation since 2009 when the UAE established its embassy in Nigeria.

He recalled that in December 2020, a Memorandum of Understanding was signed by both countries to engage each other bilaterally.

The lawmaker said as a result, the airline shut down its operations and after an interface with the Ministry of Aviation, the operations resumed but the airline continued to subject Nigerians to further screening.

“A development the federal government frowned at and thus, suspended from airline flying in Nigeria.

“The House is aware that hundreds of Nigerians living in the UAE are losing their jobs on the account of the authorities to renew their work permit.

“This offends the letters of bilateral agreements which both nations are signatories to.

“The House is worried that there are rumours that the refusal to renew work permit for over 1,000 Nigerians in the UAE, is a calculated attempt to pressure the Nigerian Government into accepting their condition of service of the national airline which could have lost humongous revenue.

“If the Nigerian government does not urgently engage the UAE, thousands of Nigerians living and working in the UAE will lose their livelihood,’’ he said.

Contributing, the Deputy Speaker, Ahmed Wase (APC-Plateau), stressed the need for reorientation for Nigerians living abroad so they can conduct themselves properly.
Toby Okechukwu (PDP-Enugu) said the motion was critical because Nigerians are at the verge of being disengaged from their jobs in the UAE.

According to him, “the earlier, the better because we do not have options here, we do not have alternatives for them here, whatever the issues are, let us resolve them”.

The House thereafter resolved that members of the ad hoc committee be drawn from House Committees on Aviation, Foreign Affairs, Presidential Task Force on COVID-19, Interior, National Orientation, Diaspora and Treaties and Protocol.