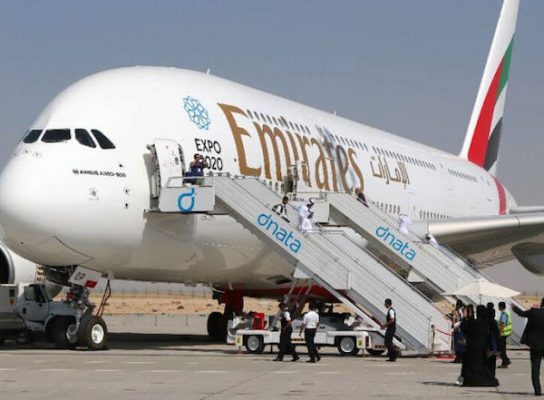 The Federal government has announced the possible resumption of flights between Nigeria and the United Arab Emirates (UAE).

Direct flights between both countries were suspended in March over issues relating to COVID-19 protocol.

Speaking at a media briefing on Monday, Mukhtar Muhammad, National incident Manager of the Presidential Steering committee on COVID-19, said that both countries have agreed on the reviewed travel guidelines and conditions imposed by the UAE government.

He explained that the Federal Government has succumbed to the COVID-19 testing requirement earlier imposed by the UAE government in March 2021 to maintain harmony.

On the resumption of Emirates Airline’s flights to Nigeria, he said there had been extensive deliberation on the matter — gap had been significantly closed between the position of Nigeria and the UAE.

Emirates Airline is the flag carrier of the UAE.

“They have met some of our requirements, and we are just waiting for one confirmation,” NAN quoted Muhammad as saying.

Also speaking at the briefing, Musa Nuhu, Director-General of the Nigeria Civil Aviation Authority (NCAA), said Emirates Airline would soon resume its flight operations in and out of Nigeria.

Nuhu said that there were still ongoing discussions with the airline.

In February, Emirates directed Nigerian travellers at the Lagos and Abuja airports to conduct rapid COVID-19 tests before departure, which led to a ban on Emirates flights in Nigeria.

The ban was later lifted after the airline agreed to stop the rapid antigen tests.

In a twist in March, the Federal government reintroduced the ban, explaining that Emirates had continued to conduct rapid antigen tests for passengers before departure from Nigeria.

The NCAA had said the moves by Emirates violated the country’s COVID-19 protocols — while Hadi Sirika, minister of aviation, described it as “discriminatory profiling” of Nigerian travellers.