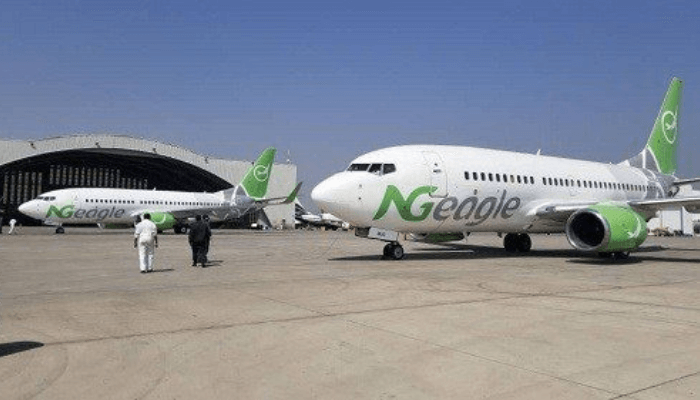 The National Union of Air Transport Employees (NUATE) has urged the Presidency to intervene in the brewing crises over the directive given by the House of Representatives preventing the Nigeria Civil Aviation Authority (NCAA) from issuing an Air Operator’s Certificate to NG Eagle, the airline being set up by the Assets Management Corporation of Nigeria (AMCON).

During a press conference held at its Lagos secretariat on Wednesday, the General Secretary of NUATE, Ocheme Aba, said the intervention of the Presidency is needed on the issue of indebtedness of Arik Air to the Federal Airport Authority of Nigeria (FAAN) and other government agencies with a view to aiding AMCON to continue with its rescue efforts in the airline which is the best option for now to safeguard all interests.

The union said that denying NG Eagle an AOC will shut out 20,000 potential jobs for Nigerians and the opportunity for a reasonable number of Arik staff to move to the new airline.

It called on Secretary to the Government of the Federation (SGF) and the Chief of Staff to the President (CoS) to urgently facilitate an immediate cease-fire and chart a path to progress on the sensitive issues.

The Association of Nigerian Aviation Professionals (ANAP) and the FAAN Branch of Nigerian Union of Pensioners (NUP) had written a petition to the House of Representatives, asking it to direct the NCAA not to issue AOC NG Eagle over fear that Arik Air is transforming itself to NG Eagle and would thereby escape its heavy indebtedness to FAAN and other aviation agencies.

They accused AMCON, the receiver-manager of Arik Air of using the assets of the airline to float NG.

But NUATE alleged that the issue of indebtedness of Arik Air to FAAN and the NCAA is a smokescreen, adding that the real issue is the politics of a new national carrier.

“As AMCON and the Ministry are both agencies of the Federal Government, there is clearly no possibility of the two airlines operating side by side as national carriers.
“The fear is that if NG Eagle succeeds, then the minister’s project would be jettisoned. That means one of the airlines must bulge. This, we understand, is the crux of the matter.

“This does not in any way downplay the significance of Arik’s indebtedness to FAAN and others. If anything, it suggests that there is a pressing need to find a solution to Arik’s heavy pile of debts.

“The above situation has pitted FAAN and NCAA on the one hand against AMCON on the other hand.
“NCAA and FAAN are parastatals of the Federal Ministry of Aviation, while AMCON is a parastatal of the Federal Ministry of Finance and is also supervised by the Central Bank of Nigeria (CBN).
“The two Ministers, the CBN Governor, and the heads of the other agencies are all senior officers of the Executive arm of the Federal government of Nigeria.
“Therefore, this executive fiasco alludes to the failure of the executive to put its house in order. This, unfortunately, paints a picture of a government at war with itself and if this war is not quickly brought to an end, we fear that the aviation sector of the national economy will suffer dire consequences.

“At the last count, Arik Air’s debt burden is in the region of N300b, whereas the airline’s assets are worth only about half of its total debts. What this means is that Arik Air is unable to pay its debts and it cannot under any circumstances.

” This is a solid fact that cannot be altered by the denial of AOC to NG Eagle. The point here is that Arik Air or AMCON cannot raise N19b being demanded by FAAN and the NCAA and it is honestly unhelpful to create enmity with FAAN or NCAA for Arik Air or AMCON since the airline will always need the support of the two Agencies to survive.
“Therefore, those proposing that AMCON’s NG Eagle’s AOC should be on hold until Arik Air’s debts are settled are only pushing AMCON to the wall; and that is towards liquidation.
” Considering the airline’s low worth compared to its huge debts, liquidation will bring about a chaotic end to Arik Air by which all parties will be losers. This should be avoided by all means,” Aba advised.

We may consider concession to repay railway loan — NRC boss