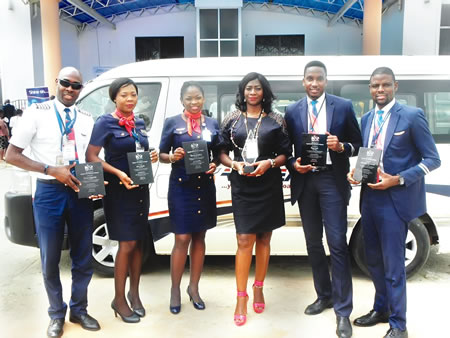 Abiola SeunMembers of the cabin crew of Air Peace airline, Accra-Lagos flight on July 17, 2021 have been applauded for thwarting alleged onboard theft by one Eze Kelvin.

Consequently, Kelvin according to the spokesperson of the airline, Stanley Olisa has been blacklisted from flying any Air Peace aircraft because of his habitual Inflight stealing behaviour.

Olisa, who said Kelvin was about to steal a considerable amount of money belonging to Engr Adedeji Adeniyi, the Managing Director of Toptech Engineering Limited, disclosed that Air Peace crew that thwarted the alleged stealing have been recognised with 5 Awards of Excellence by the Management of the engineering company in Lagos.

According to Olisa, “our crew noticed Kelvin taking an envelope of money from Adeniyi’s laptop bag in the overhead cabin. Aware of the former’s theft antecedents, our crew subtly questioned him about the ownership of the bag, which he claimed was his.

“But when Adeniyi returned from the lavatory, it was confirmed that the bag belongs to him. Adeniyi later disclosed that the envelope had a significant sum, which was still intact when Kelvin returned the envelope,” Olisa explains.

Olisa stated that the incident was immediately reported to the Airport Security Officials who are handling it, and added that Kelvin has been blacklisted from flying with Air Peace.