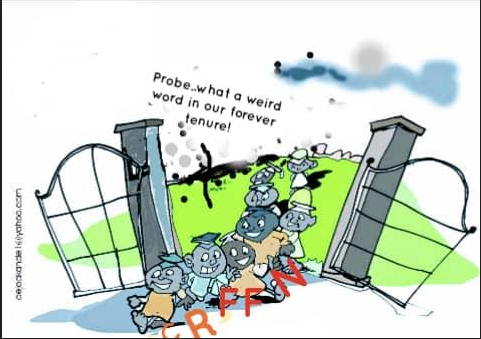 In a bid to sanitise and regulate the operations of freight forwarding industry in Nigeria, the Federal Government, through an Act of Parliament No 16 of 2007, created the Council for Registration of Freight Forwarding in Nigeria (CRFFN).
The first governing council, which has 15 elected and 17 government appointed members, was inaugurated for a two- year tenure in 2008 while the second governing board came  in 2010 for another two-year term.
The third governing council, which should have berthed in 2012, suffered a long delay of six years due to bickerings among the federating freight forwarding associations which stalled the elections during the intervening years.
It was not until 2018 that the third governing council came on board.
Out of the three governing boards that have administered the CRFFN since inception,  the third governing board has been most controversial in tenure, composition, operations and character.
The third governing board, headed by a retired soldier, Tsanni Abubakar, has the most embarrassing, unenviable and uninspiring  tenure that has come under unsparing attacks by the large army of freight forwarders.
The third governing council has courted and hugged controversy from its inception.
The elections of its 15 representatives of the five federating freight forwarding groups were steeped in controversy as the elected members, thrown up by the election, were products of compromise, many of whom didn’t enjoy the support of their constituencies.
Quite contrary to tradition, the inauguration of the council  members after the flawed  elections, suffered four months delay.
Whereas, the election was conducted in July 2018, the board was not inaugurated until November 2018.
The inauguration proper was also dramatic as both the elected and appointed members waited for two days with uncertainty in Abuja before the Minister of Transportation, Rotimi Ameachi, eventually inaugurated them.
Even at that, the Chairman of the governing board was hand picked by the Minister among the government appointees and imposed on the rest of the members of the governing council admist protests from the 15 elected members who statutorily should have produced the Chairman through an elective process.
But  their muffled protests were brushed aside by Ameachi .
So, the third governing council of the CRFFN, was designed to fail, abinitio.
We are therefore not surprised that the Council, for two years, was redundant, uninspiring and laid back.
It was a unanimous belief among the army of freight forwarders, its primary constituents, that the third governing council did not made any impact on the lives and operations of freight forwarders in Nigeria.
For two years, the governing council had engaged in activities that have given its members away as those who lack vision, focus and direction.
It has exposed them as members whose activities are steeped in self- preservation and self- glorification.
Whereas, the Act which established the council stipulates, among other things,  that it should promote highest standard of competence, practice and conduct among practitioners, ensuring professionalism and best ethics practices,  members had rather engaged in everything except those that will improve the fortunes of their constituency.
Allegations and counter -allegations of financial improprieties, pillage, crass inefficiency and incompetence have become regular companions of the council members.
The Council has allegedly collected over N20 billion as budgetary allocations since 2015 till date, without anything to show for it.
The Council got
N319,111,8711.00 in 2015,
N542,111,602.00 in 2016,
N3,942,709,857.00 in 2017 and N5,734,817,754.00 in 2018.
It was also alleged that the sum of N1. 6billion could not be accounted for in the 2020 budget.
Apart from that, the Registrar and Chief Executive Officer  of the Council, Barrister Sam  Nwakohu was accused of financial impropriety by some members of the governing council to the tune of N300m.
Added to this are the bickerings generated by  their failed  attempts to collect the controvesial Practitioners Operating Fees(POF) which freight forwarders have vehemently resisted.
The Council is also accused of scheming for tenure elongation through the proposal for an amendment to the Act which they surreptitiously slipped  into the National Assembly through the back doors.
All these malfeasances have made the third governing council  stinks to the high heaven.
It has also made its primary constituents to have lost confidence and hope on the CRFFN.
It is sad to note that a good intention with noble cause as represented by the creation of the CRFFN has been bastardised by the conduct and activities of the third governing council members whose tenure has since elapsed but refused to go.
But rather than initiate succession plans through elections, the current board is hell bent to stand logic on the head in order to achieve its inordinate ambition of tenure elongation.
This has not only alienated the members of the  governing board from their constituents but has also  brought them to public odium and disrepute.
We believe the only way the council could regain its dwindling glory and wanning confidence among its constituents is for government to initiate a far- reaching audit of the activities and operations of the Council, especially the third governing body.
An audit exercise, which should be comprehensive and extensive in scope and character, should be undertaken to determine the level of rot and amount of pillage which the finances of the council have been subjected to over the years.
Failure to do this, we dare say, will continue to cast the succeeding governing councils in bad light which the sceptical stakeholders will  regard in the mould of the third governing council which have become the antithesis of the objectives and aspirations of the progenitors of the CRFFN.
If the govenment dithers  in scrutinising the tenure of the third governing council, the suceeding boards may not be able to attract men and women of integrity who may  avoid elections into the CRFFN like a plague.
We therefore urge the government to rekindle hope and confidence of stakeholders, especially the freight forwarders, in the CRFFN by thorough cleansing of the embedded rot in the CRFFN.
This, we believe, will replace the wide spread apathy, forlorn hope and indifference towards the CRFFN by  freight forwarders who are distraught by the level pillage going on at the council.