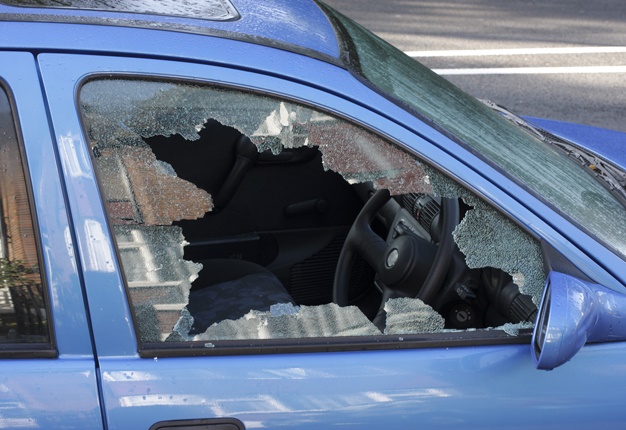 "A jagged black hole with cracked and crazed glass reveals the workings of a thief in the night, during the morning after. One more car crime on the streets of London.More smashed windows / broken glass:"

Criminal activities at the Apapa and Tin-can Island ports have resurgent and  reached an alarming proportion as wharf rats plifer importers’ cargoes and broach containers at the ports.

Pilfering at the seaports, according to investigations, have been happening unabated at the Lagos seaports as container laden with cargoes are mostly broken into and the content plifered at night.

It was gathered that contrabands, especially tramadol and codeine seized by the Nigeria Customs Service (NCS), also suffer same fate forcing the service to place any seized contraband at the port under strict security surveillance.

Nigerian Ports Authority (NPA) as landlords of the port is expected to ensure that Nigerian ports comply with minimum security requirements and access control.

However, stakeholders have attributed the resurgence of activities of wharf rats to criminals residing inside the Apapa and Tin-Can Island ports.

According to the officials of the National Association of Government Approved Freight Forwarders (NAGAFF), scores of homeless miscreants have taken over the Apapa port sleeping at various terminals.

Speaking, the Chairman, 100 percent compliance team of NAGAFF, Alhaji Ibrahim Tanko, alleged that people who sleep at terminal operator’s Platform in the night and play football after working hours are responsible for the cargo theft.

According to him, those sleeping at the terminals are responsible for various forms of criminal activities, ranging from broaching of containers to looting of cargoes.

He said, “container broaching is an organised crime because one person cannot carry this activities out successfully. There is a need to reduce crowd at the examination bay because we observed that about 50 – 60 people sleep in APMT platform.”

Tanko explained that urchins pilfer cargo at the examination bay, especially those seized and kept by Customs.

“There are number of times the containers seized by Nigeria Customs Service, kept at the designated area, were broken by these wharf rats, carted away with the cargoes especially, banned substance like Tramadol,” Tanko alleged.

“The APM Terminal is not a sleeping place nor a football field. Those doing that should stop. Everybody has a role to play both the Nigeria Police, Nigeria Customs Service, NPA, DSS and others.

”APM Terminal are not the owners of the port, rather partners. Since the platform housing Customs offices now belong to Customs as I am made to understand,  Customs should then take charge”, the NAGAFF National Vice-President, declared.

Nicol said, “NPA and Port police are responsible for security of the port and they should prohibit residing at the port because seaport is a transit point and not a residential area.
“So, NPA should step up security as the ports  and there is need to be International Ships and Ports Security (ISPS) code compliant and anywhere there are lapses should be blocked,” he said.
The Vice-President, Association of Nigerian Liscenced Customs Agents (ANLCA), Kayode Farinto, said people who reside in the port do that because of the Apapa traffic gridlock.

According to him, majority of people accessing the ports had nothing to do at the port, saying government should delineate port area.

He said government must ensure digitalisation so as to reduce human interface and people seeking access to the port daily.
He said, “Government should tackle agencies especially the Nigeria Customs Service that engage in physical examination of cargoes.
“Also, what makes clearing agents and truck drivers sleep in the port was because of the gridlock. The only agencies that can stay in the port is Police and customs,” he said.