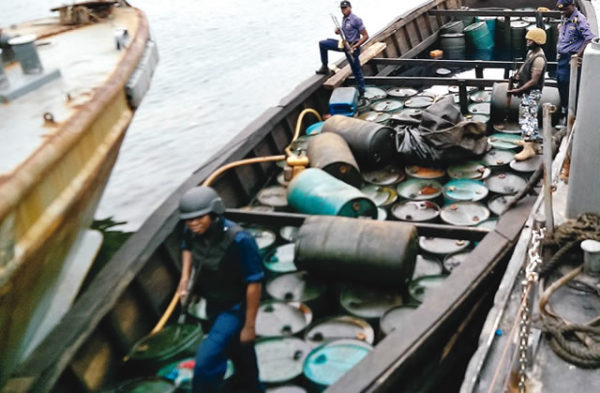 The Western Marine Command (WMC), the amphibian arm of the Nigeria Customs Service (NCS) has disclosed that it seized a total of 865 kegs of Motor Premium Spirit (PMS) at the Ashipa rivers within the coastal and harbour patrol (Bar-Beach).

The command ,which stated this on Thursday,added that the interceptions were made on 8th of December, 2021 on credible intelligence information.

Addressing newsmen on the development, the Acting Controller of the command, Deputy Comptroller Enonche Ochiba noted that the kegs were secured and evacuated to the base saying that upon examination, it was found 865 kegs of 25 litres each were discovered containing PMS amounting to a total of 21,625 litres.

Though no suspect was arrested during the operations by officers and men of the command, the Customs boss stressed that the total Duty Paid Value (DPV) of the seizure stood at N3,633,000.00.

He said with the seizure of PMS were strong indication that the operatives of the Command were working tirelessly to combat smuggling on the waterways.

Ochiba further warned smugglers and would-be smugglers; that personnel of the service would continue to run them out of business saying, “We are aware of your plans during the yuletide season, I want you to know that our operatives are vigilant and on patrol duties to tame the scourge of smuggling activities and other vices on the South Western waterways and will leave no stone unturned until you are apprehended and prosecuted,” he warned.

The DC also commended other security agencies for their support in the fight against smuggling along the waterways, pointing out that intelligence gathered led to the seizure of petroleum products.

His words, “I want to use this medium to appreciate the efforts of other sister agencies and patriotic Nigerians for their contributions in providing relevant information in our fight against smuggling.

“Let me on behalf of the Officers/Men of Western Marine Command appreciate the CGC and his management team for their motivation and support given to the Command in the discharge of our statutory responsibilities.

“The operatives will continue to discharge the duty vested on them and will not rest on
their oars in the fight against smuggling and drug trafficking.