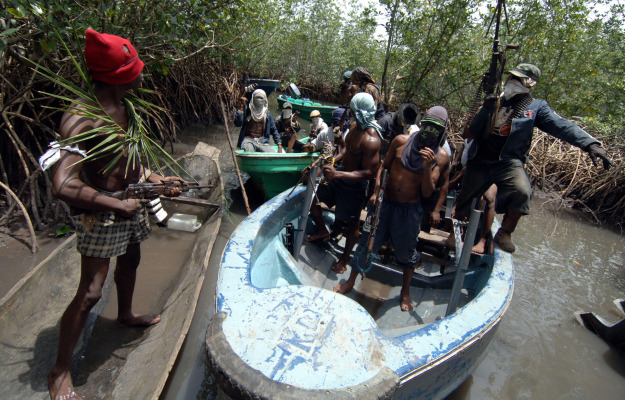 Okrika, NIGERIA: Ateke Tom militants arrive by boat at their camp, 13 April 2007, in Okrika, Rivers State. Ateke Tom is the leader of the Niger Delta Vigilante, an ethnic Ijaw militia in the Niger Delta region of Nigeria.Many militant groups in the delta say they are fighting for the control of government oil wells. AFP PHOTO / LIONEL HEALING (Photo credit should read LIONEL HEALING/AFP/Getty Images)
Chinazor Megbolu

The Nigerian Navy had chided the Nigerian National Petroleum Corporation (NNPC) for the loss of 200,000 barrels of crude oil to pipeline vandalisation and illegal refineries.

The security agency said this  during a press briefing to mark its 64th anniversary celebration, saying that 577 illegal refineries were deactivated since 2020 across the Niger Delta region by its personnel.
The Chief of the Naval Staff (CNS), Vice Admiral Awwal Gambo, in his address in Abuja, stated that the Navy has no hand in the loss of crude oil theft, which he blamed on the NNPC.
He added that the  situation is hinged on procedural gaps within the national oil company.
Gambo, who was represented by the Chief of Policy and Plans, Nigeria Navy, Rear Admiral Christian Ezekobe, said the loss of such quantity of crude was as a result of the NNPC inactions.
He explained that why the country was still registering such loses, came up at an earlier meeting with NNPC in spite of the Navy’s campaign against crude oil theft.
Gambo pointed out that when illegal refineries were dismantled by the Navy, the NNPC didn’t respond to calls to evacuate the products.
“The question (at an earlier meeting with NNPC) was posed by us, and we said 200,000 barrels per day is like 27,000 metric tons. Now, if you can imagine a vessel of 27 000 metric tons, the size and quantum of such vessel, it becomes evident to you that these loses are not only occurring through pipeline but through vandalisation and illegal refineries.
“It means that in the process and procedures within the system, there are things that are not being done that must be done, and I think the Chief of Naval Staff impressed that on the organisation.
“There is so much the Nigerian Navy can do and there’s so much it cannot do. We have put it before the NNPC that even when we dismantle illegal refineries, we invite them to evacuate the products; this is not a blame game, but they fail to do it.
“But they have assured us that moving forward, this won’t be done in the future.
“For the 200, 000 barrels, the Navy will want to look at the economics of the maritime security, what is the cost of the loss? What is the cost of equipping the Navy adequately?,” Gambo asked.
He maintained that the Navy did exceptionally well in the fight against crude oil theft (COT) and illegal oil bunkering, considering the short period that this administration had been in the office.
According to him; “the Nigerian Navy has through operations conducted by operations bases and Forward Operating Bases (FOBs) cumulatively deactivated a total of 95 illegal refineries between January and May 2021.
“These activities were complemented with series of swamp buggy operations in the areas where illegal refineries were discovered.
“To appreciate this effort, may I state that from records, 477 illegal refining sites were deactivated between July and December 2020. This figure drastically decreased in the last four months (January to May) to 95”.
Gambo further posited that success of denying nation’s economic saboteurs thousands of barrels and litres of crude oil and diesel and saving Nigeria billions of naira could be attributed to the increased effort of the Navy’s Ops bases especially through Op River Sweep.
“Another key contributing factor to the success is the Navy headquarters’ sensitisation and directives to all bases on zero tolerance to crude oil theft and illegal bunkering activities,” Gambo said.

Barge operators decry lack of space for operations at ports