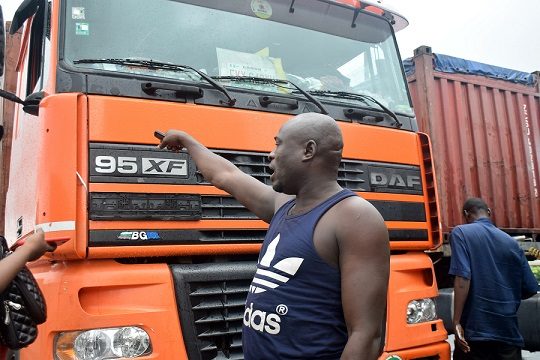 Segun Oladipupo   |
Maritime operators have accused the MSC shipping line of using container trucks as its holding bay on the port access roads sometimes for a period exceeding one month while still charging demurrage.

As a result, they are pleading with government agencies to prevail on MSC shipping company to provide holding bays where trucks will deliver their empty containers

The operators said some trucks have been laden with empty containers belonging to the company for more than one month now for want of where to drop the containers even as the trucks are denied access to the ports.

Recall that there have been several calls for shipping companies to provide holding bays for their trucks and avoid using tricks as their temporary holding bays.

The Nigerian Ports Authority (NPA) had sanctioned the shipping lines without holding bays but withdrew the sanction within a few days even when the holding bays were not provided.

A development that stakeholders adduced could be due to powers beyond the Managing Director of NPA that are behind the shipping lines.

Alhaja Inuwa Mohammed, Chief Executive Officer of Gee Gee Global Services, a logistics company, lamented that there were many trucks at different garages laden with MSC empty containers but have nowhere to drop them.

He, therefore, called on the relevant authorities to intervene in the development.

Inuwa however said that truck owner should be paid demurrage by shipping companies for using their trucks as holding bays.

He added that even when truckers are forced to drop containers at alternative container depots, they are made to pay between N170,000 to N180,000 before the terminals receive the containers.

Inuwa said that such cost should have been borne by the shipping lines but regretted that the government agencies are not doing enough in this regard.

“There are so many trucks carrying their empty containers parked at various garages that are finding it difficult to return the empty boxes for over a month now, as the trucks have been denied access to cross Sunrise.

“Those that were directed to go and drop at Brawal Kirikiri phase, each truck of 40ft container the truck owner pay between #170,000 to #180,000 before the container will be received.

“Please we want the relevant authorities to intervene.

On his own Emmanuel Onyeme, a Customs Broker and chieftain of the Association of Nigerian Licensed Customs Agents (ANLCA) said that MSC did not have holding bay.

According to him, the company’s ship comes to Nigeria with a large volume of containers without provision for where the empties would be kept.

He also called on the government to look into the activities of the shipping line that is using trucks as holding bays and at the same time charging demurrages in containers that are on truck backs.

“MSC doesn’t have anything called “HOLDING BAY “. Their vessels come in with large volumes of Containers.

“The Ship that came in on Saturday “MSC ALYSSA with 1000+ ” in Ports and Cargo Terminal right now. The Government should look into the activities of this Shipping Line that is using TRUCKS as holding bay and charging Nigerians demurrage while the Containers are on top of trucks looking for places to drop them and at the same time paying for dropping.