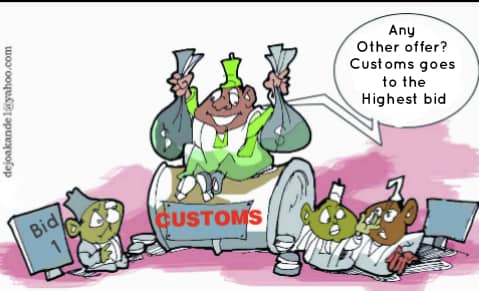 Penultimate week, the Federal Executives Council (FEC) approved the concession of the modernisation process of the Nigeria Customs Service.

The project, worth the sum of $3.1billion, was concessioned to a Consortium of companies consisting of  Messers E-Customs HC Project Limited, Y. Technonogies, the Bionica Technologies West Africa Limited, Bargain Securities and Supplies Nigeria Limited who  are the  lead sponsor and co-sponsor respectively.

The Africa Finance Corporation (AFC) as the lead financier and Huawei Technology as a technical service provider.

The concession agreement, which spans a period of 20 years, will involve the modernisation of the processes and procedures of the Nigeria Customs Service, including its revenue generation which the concesionaires will take over through which they are to recoup their $3.1 billion investments.

Expectedly, the decision of the Federal government, which was clinically executed in the mould of a coup d’é tat, caught many industry stakeholders pants down.

It also generated animated discussion as the approval was granted in defiance of the popular wish of the operators.

Since 2019, when the industry got wind of this concession deal, there has been concerted opposition mounted by the aghast operators who felt the move was an attempt to give away our common patrimony to the foreign interests.

Then,   Hon.Jerry Alagbaso, a former Customs chief and member of the House of Representatives, rallied the National Assembly against the move.

But to the chagrin of everyone, the Federal government pulled a fast one on all the antagonists of the project.

We are less disconcerted over this concession deal which we believe was willing away the nation’s cash cow for 20 years to the foreign imperialists and their local collaborators.

We are at a loss on what powerful forces which could have forced the hands of the Federal government to enter into this type of deal against the popular counsel of knowledgeable stakeholders.

Modernisation of Customs, they said.

What is there to modernise in the processes and procedures of the Nigeria Customs Service?

At the risk of being controverted, we dare say the Nigeria Customs has the most advanced form of automation process among the government agencies in the industry and one of the most automated in Africa.

The only challenge which the  service has is human.

Some of the  men and officers of the service are clearly averred to full automation due to their selfish and pecuniary interests.

Automation process will eliminate human contacts which is the avenue for extortion and exploitation.

Since 2003, Nigeria Customs has gone through series of automation processes that have made its processes and procedures seamless.

The Automated system for Customs data (ASYCUDA) and its advanced form of ASYCUDA+, ASYCUDA++, the Nigeria Customs Integrated system (NCIS1 &11),  Pre-Arrival Assessment Report (PAAR) are some of the automation platforms created by the customs management over the years to make customs operations seamless.

Even, in 2013,  the Service developed a web-based application to provide information and guidelines for international trade business processors, export and transit trade which is called Nigeria trade Portal which is interactive.

To our mind, what the service needs is to upgrade these automated platforms, integrate them with other players in the cargo documentation and clearance chains under the neglected single window project.

With adequate capital outlay, we believe Nigeria Customs can achieve full automation status without the involvement of foreign economic imperialists, aided and abetted by their avaricious local collaborators.

The anti- automation officers, who are averred to technology due to their selfish interests, should be reformed.

If they are adamant, they should be shipped out.

Cargo scanning should be emphasised while physical examination of cargoes should be sparingly used.

With these and all other automation platforms well integrated on the single window under the supervision of a willing Customs administration, the Nigeria Customs will be a world class agency.

We are however least surprised  at the tenacity of these economic vultures in their quest to lay hands on the Nigeria Customs Service, which is gradually emerging as the cash cow of the nation.

Apart from oil , maritime is the second highest revenue earners for the country and Nigeria Customs plays a key role in this regards.

With the yearly earnings in the excess of a conservative estimate of one trillion naira and the capacity to do more, as well as the dwindling earnings from oil due to global crisis in oil market, maritime industry nay Nigeria Customs is understandably the preferred bride for these economic speculators.

Various attempts have been made in the past to dip their hands in the Customs’ till without success.

In 2011, illegal concession of Customs key functions between the ministry of finance and a company called Single Window System and Technologies was shot down.

In 2017, another move for Customs modernisation was made by technical committee on Comprehensive Import Supervision Scheme(CISS) which was pretentiously acting on behalf of the Federal government, with a  technical partner called Adani system Nigeria limited.

The attempt, which sought to concession the Customs then for 25 years,  was frustrated.

However, in a blatant disregard for popular opinion, the Federal government, after several failed attempts,   eventually forced down the throat of the  unwilling stakeholders, the concession of the agency.

However, the deeds have been done.

Any further lamentation by the stakeholders on the issue is crying over a spilled milk.

Now that the government has had its way, we can only hope that its  aspirations for the concession will be realised.

The Minister of Finance, Budget and Planning, Zainab Ahmed, has said the government stands to realise $176 billion from the project without spending a Kobo.

The question is how much will the concessionaires realise within the 20- year period of the deal beyond the $3.1billion investments they are expected to sink into the project?

What would be the fate of the customs officers whose job will be affected by the take-over of the revenue functions of the agency?

It is instructive to note that one of the two core functions of the customs, which is revenue generation, has now been concessioned under the guise of this new modernisation project, leaving them with the anti-smuggling function.

We hope rather than render some crop of officers reductant which may lead to possible right-sizing of staff, they could be redeployed to beef up the anti-smuggling function of the service.

We are worried by the involvement of Chinese in the project as represented by Huawei  which serves as technical partner.

The ubiquitous Chinese have gradually become a leech on Nigeria, sucking on the economy of the nation.

We can only hope that the modernisation project will leave the Nigeria Customs service better than it met it.

We equally hope the project will not be sabotaged by disgruntled insiders whose means of livelihood is being threatened.

The misadventure of the  Professional Import Duty Administrators (PIDA) between 1996 and 2000 in the Nigeria Customs Service is still poignant in the memory of those who were in the know.

At this period, a firm of an accounting/consultant was engaged as professional Import Duty Administrators to complement the Nigeria Customs Service in the task of revenue generation.

They left the service worst off than they met it.

We appeal to the Federal government to ensure that this project transforms the service to technologically-driven agency which operations are seamless and paperless. 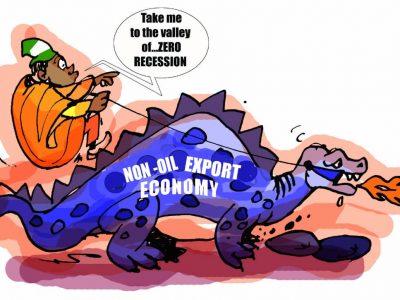