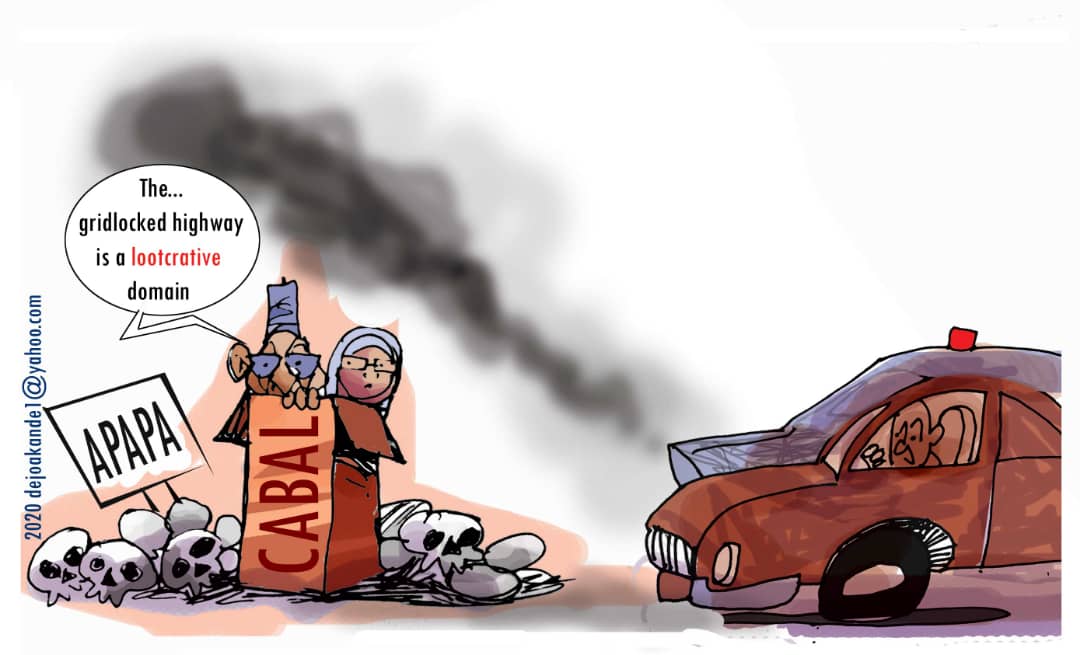 The Apapa traffic gricklock has become a national malaise which has defied all the solutions thrown at it.

It has become a perennial headache for ports users who daily go through the intractable maze of traffic to access the ports. Ironically, the harder the efforts of government to decapitate the monster, the ferocious it becomes in intensity.

But for the period the arrangement lasted, the problem grew in monstrous proportion until the Naval personnel were chased away due to their unbridled extortions.

Then came the Presidential Task Team in 2019 which comprises of all the relevant security agents to tackle the monster.

Apparently underrating the enormity of the problem, the Federal government initially gave the task team three months to carry out its assignment of restoring sanity to the chaotic port access roads. But when the government realised that it was no mean task, the mandate of the team was extended by another three months. The task team eventually spent 19 months before it was also disbanded by the government. Even at that, the problem was far from  being over.

We are as much concerned with the intractable nature of the gridlock as other critical stakeholders despite the genuine efforts of government to tackle the problem.

We are also curious to know why all the antidotes applied to cure the malaise have not been effective.

But unknown to many, the malignant traffic gridlock is being sustained by some greedy profiteers who feed fat on the problem. The gridllock has become one big  racket which they daily feed on.

They are members of a powerful cabal that have so far held the industry hostage and made several efforts to rid the ports access road of this insanity.

What is easily visible to the public are the different officials of the disbanded presidential task team who are accused of massive extortions on the roads.

In as much as we are not  out to repudiate the claims, what many people do not know is that the members of the cabals who fuel road rage are operating behind the scene.

They  include some senior NPA officials, the terminal operators, shipping companies and some truck owners while the timidity of the Nigeria Shippers Council to enforce the law has further emboldened the members of the cabal. We shall explain the role of each profiteer.

The NPA, terminal operators, shipping companies and Nigeria Shippers Council are the custodians of these processes.

The shipping companies benefit from the gridlock because of the empty containers deposit regime while terminal operators, with whom they share the same affinity, encourage the road rage because of the demurrage policy.

A congested road will make it difficult for importers or their agents to return the empty containers to the few holding bays that are not even functioning.

If the empties are not returned at specified days, the importers lose their deposits. They even draw negative.

A congested access road will also make it an  herculean task for importers and their agents to take delivery of their containers and move them out of the terminals.

The more days the containers stay at the facilities of the terminal operators after the initial rent free period will attract demurrage charges which are equally high.

Also, an empty container that is routed to a terminal by the shipping company will attract charges for as long as it is not dropped at the terminal due to traffic congestion. The NPA staff control the movement of trucks in and out of the ports through call up system.

Specifically, the Port managers at Tin Can and Apapa ports, the traffic Managers and port security officers at these two ports which attract the highest truck movement due to the large volume of cargo at these ports issue call up cards. We have it on good authority that these senior NPA officials make a kill from the chaotic system.

The call up cards which are supposed to be free, are being sold to truckers who are desperate to beat the long queues to enter the ports.

It was these same officials who frustrated the effective functioning of the Lilypond transit park that was meant to sanitise the call up system.

Similarly, it was these same members of the cabal who frustrated the early introduction of the  electronic call-up system which should have started over a year ago.

There are also middlemen who arrange for trucks for importers and exporters. They are called movers who do not have trucks but profiteer from the gridlock. They hike the cost of transportation indiscriminately as a result of the cultured gridlock. This explains the current astronomical increase in movement of  goods out of the ports.

The timidity of the Shippers’ Council to tackle the shipping companies and the terminal operators for their exploitative activities has unwittingly encouraged the operations of the cabal.

We notice that in as much as the Executive Secretary of the Council, Barrister Hassan Bello, has the passion to stem the increasing impunity of these operators, he is politically handicapped to work his tough talks.

So, the activities of the cabal grew in leaps and bounds, gleefully exploiting the unending traffic gridlock which they have so far sustained through their corruptive activities.

We welcome the belated decision of the NPA management to introduce the electronic call-up system in January, 2021.

But our worries are that will  members of the cabal not sabotage this laudable effort that will deal a crushing blow to their illegitimate source of livelihood.

We advise the NPA management to probe the management of the manual call up system which has so far been used to sustain the intractable traffic gridlock at the Lagos Port.

The inquiry should look beyond the activities of the Presidential Task Team whose members could not totally extricate themselves from the rot on the roads.

We advise that the activities of the big masquerades who are operating behind the scenes to frustrate the attempts to end the embarrassing gridlock  be scrutinised if the electronic call-up system would have a lasting effect on the insanity playing out on the Port access roads.