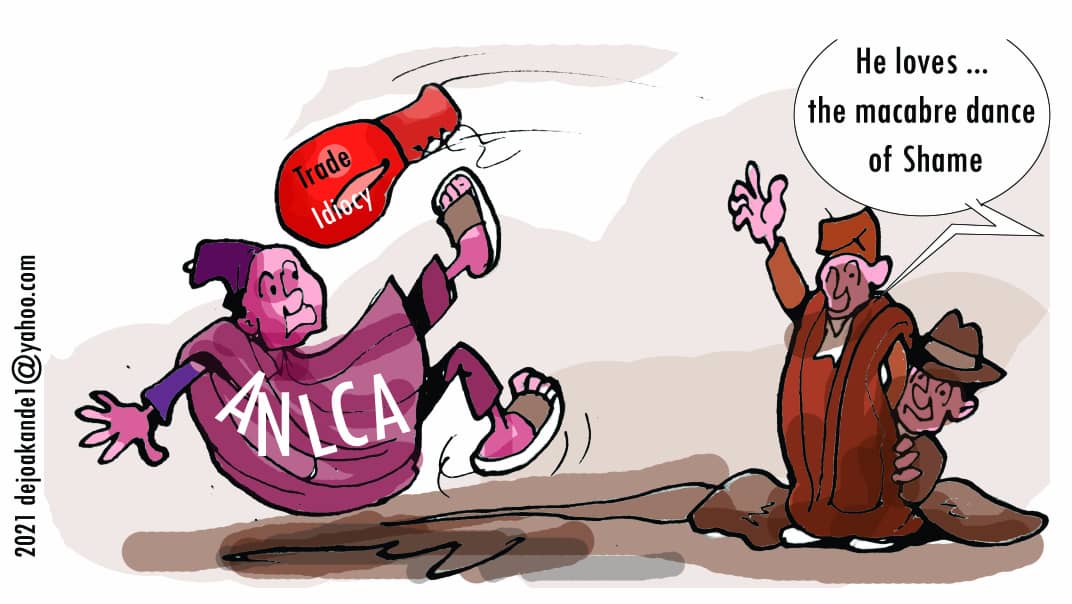 The ANLCA' s Dance of Shame

In recent years, the Association of Nigerian Licensed  Customs Agents (ANLCA) has become a theatre of comedy where stakeholders are being treated to different tunes of absurdities.

The foremost freight forwarding association has been reduced to a laughing stock and a butt of cruel jokes among the amused onlookers who are increasingly getting irritated by display of naked macabre dance of its actors in the market square.

Since 2018 when the present National executives council led by Tony Iju Nwabunike, assumed office, the ANLCA has being embroiled in an intractable crisis, a self-inflicted crisis rooted in greed, selfishness, inordinate ambition  and self- preservation.

The malignant crisis took its root in the Warri elections of the association’s Board of Trustees (BOT) elections in February 2014.

For six years when the BOT led by Chief Henry Njoku held on to the position of Chairman, the association has been in a turmoil.

It took the administrative sagacity of the former National President of the association, Prince Olayiwola Shuttu, to manage the crisis and prevented it from exploding until he left office in 2018.

The implosion occurred soon after Nwabunike took over due to his poor handling of the repressed animosity between Njoku faction  and Alhaji Taiwo Mustapha faction, both of who were laying claims to the juicy position of the BOT chairmanship.

Even since then, the association has engaged in a shameless naked dance as two factions emerged in the ANLCA as the faction led by Njoku was constantly embroiled  in a “roforofo” fight with the faction led by Alhaji Mustapha, culminating to eight court cases.

It was a ding-dong affairs until Njoku relinquished the Chairmanship of the BOT in 2020.

But despite all attempts to resolve the crisis, the macabre dance continued as Mustapha insisted he was still the Chairman of the BOT which other faction claimed no longer existed as it stands dissolved.

In December 2020, the Association held an AGM meeting in Owerri where elections into the new board were conducted and the Constitution of the association was amended to whittle down the powers and over bearing influence  of the contentious BOT.

But the Mustapha faction boycotted the Owerri meeting which it described as illegal.

To demonstrate its resolve to  discredit the newly inaugurated BOT, Alhaji Mustapha – led faction went ahead to hold elections into the  Lagos Airport and Tin Can chapters of the association in the Western Zone last week, an exercise which Tony Nwabunke -led ANLCA declared as illegal and null and void.

This thus set a stage for another round of confrontation.

We made a chronicle of all these sordid events in the association to underline the long history of the dance of shame  in which the gladiators have engaged over the years.

The recent event has further polarised the association and immersed it deeper into abyss of crisis .

Without mincing words, there are two  ANLCA.

The mainstream ANLCA led by the beleaguered Nwabunike and  another one led by the recalcitrant Mustapha who installed parallel chapters Executives at Lagos Airport and Tin Can chapters of the association considered the most vibrant and cash cow of the ANLCA.

The intractable crisis in ANLCA, which escalated last week, is a big shame and deep indictment on the so called elders of the association.

It further illustrates the selfish posture of the ANLCA elders who have so far shamelessly displayed their lack of appreciation for the operational challenges the crisis has inflicted on the generality of the suffering freight forwarders.

If the elders, who are the members of the BOT, have the interests of the association at heart, there is nothing wrong for them to bury their differences and come together for a truce.

Nwabunike, whom we symphatise with as his tenure has been made stressful due to this needless crisis, has consistently accused Taiwo Mustapha, Ernest Elochukwu, Dayo Abdullaziz, Dennis Okafor and Taiwo Oyeniyi, all elders in the association, of stoking the ember of discord.

On the other hand, the other faction, led by Mustapha, has also accused Nwabunike of lack of sincerity in efforts to resolve the crisis.

Nwabunike has been accused of perpetuating the crisis due to his alleged sympathy for Henry Njoku, during whose tenure as the BOT Chairman the crisis started.

We want to advise all the warring gladiators to sheath their sword by embracing peace as stakeholders have become irritated by their endless show of shame.

The stakeholders, especially the rival associations, are getting tired of watching  the shameless public spectacles which the ANLCA warring gladiators have turned themselves into in their inordinate ambition to control the soul of the association.

The constant bickering in the ANLCA are no longer amusing but irritable public show of naked macabre dance at the market square.

We are not only disturbed by the fresh developments in the association which are ominous, but also disgusted by the satanic obsession with power and wealth which has seized some members to want to push the association into oblivion.

We cannot explain the obstinacy of some members who are in the position of authority in the association that have refused to relinquish their positions but instead chose to plunge the association into another war of attrition.

If their positions are  call to service, then why their stranglehold on those positions?

Why are they fighting tooth and nail for the soul of the association?

We are particularly miffed by the show of shame being displayed by the so-called opinion leaders in the association, a ludicrous grand standing that has made them a public spectacle.

It was these same group who purportedly plunged the association into a protracted crisis for this long as a result of their obsession with power.
To think that it was these same elders who have charted a new course for crisis is to say the least distasteful.
A Yoruba adage which literally translates to “an elder cannot be in the market and allow the head of an infant to bend” has been bastardised by the unenviable act of some of the ANLCA elders.

Rather than being a stabilising force, ” these elders” have instead chosen to become more or less  agents of destabilisation.

If ANLCA desires peace and the NECOM wants atmosphere of sanity without any interference from the “elders”, BOT should be made less visible and attractive and its role should be purely advisory.

Until this is done, subsequent BOT may continue to be intrusive and obstructive, stirring needless crises that will rub the association of desired peace, harmony and unity that are needed to make ANLCA strong again.

Presently, ANLCA is battle weary and cannot afford a long-drawn crisis that may make it play a second fiddle to other sister associations which are benefitting from the lack of cohesion in ANLCA.

We advise the gladiators in ANLCA to have a rethink and sheath their swords in the interests of the weaker members and the corporate existence of the association.

If they are truly interested in the progress of their members and that of the association, they should remember that where two elephants fight, it is the grass that suffers.

A divided ANLCA will be a ready meal for the Nigeria Customs Service which will exploit the present commotion in the association to subject freight forwarders to needless harassments in its bid to meet  its annual revenue targets.

Equally, other agencies such as the SON, NAFDAC including the service providers such as the terminal operators and the shipping companies will feast on the hapless members of the association who may not get adequate protection from their leaders that are at war with themselves over the spoils of office.