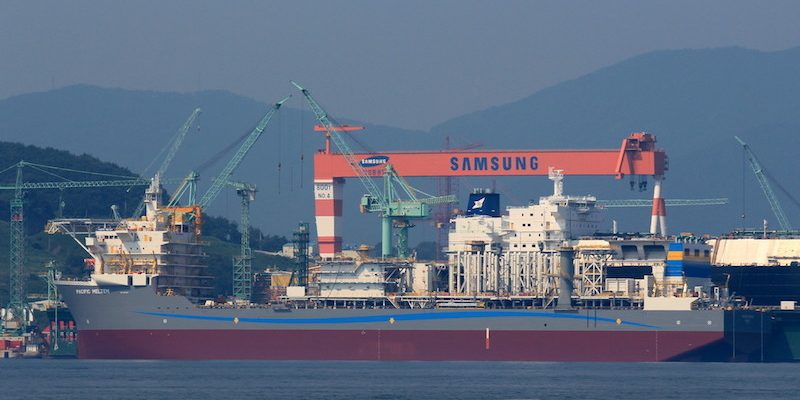 ‘Kunle Kalejaiye, Media Manager of LADOL made this known in a release on Wednesday after a joint press briefing by both parties.

The statement added that the joint venture between SHIN and LADOL was established when SHIN was awarded the $3.3billion Egina FPSO project which required the construction of the fabrication and integration yard to carry out the in-country aspect of the Egina Project.

“Over the years, several government agencies have intervened and assisted the two Parties greatly in achieving this settlement.

“SHIN and LADOL would like to thank the Nigerian and South Korean Governments for their assistance and interventions.

” This landmark agreement, which demonstrates SHIN’s ongoing commitment to its subsidiary, SHI-MCI and Nigeria, and LADOL’s commitment to consolidating and continuing the development of LADOL Free Zone to help ensure that Nigeria becomes an African hub for industrialization, ensures that SHIN and LADOL can work together as shareholders in SHI-MCI.

“SHIN and LADOL have welcomed the settlement agreement, which will be registered as an official Judgment in the High Court in London.

” It will also be registered in the respective courts in Nigeria. In addition, the settlement agreement has been approved by the Nigerian Ports Authority (NPA) and the Nigerian Exports Processing Zones Authority (NEPZA).

“The settlement agreement confirms that the Shareholders Agreement between SHIN, SHI-MCI, and MCI FZE Yard Development Limited (MCI), dated 1 July 2014 remains valid, and the current shareholding of SHI-MCI is held in the following proportions: SHIN 70% and MCI 30%.

“The settlement agreement also provides for a new sublease agreement which has been executed between SHI-MCI and Global Resources Management Limited (GRML), with the NPA as the head-lessor to GRML.

” Importantly, the new sublease agreement is long term and is one day less than the term of the headlease between the NPA and GRML.

“NEPZA, as part of its statutory duties and role as administrator of all NEPZA free zone areas in Nigeria, shall continue to be responsible for the issuance and renewal of SHI-MCI’s Operating Licence.

“On the settlement agreement, Mr. Ladi Jadesimi, the Chairman of LADOL commented the following:

“The disagreement between LADOL and Samsung has been laid to rest in the interest of the Nigerian economy. He said.

“This settlement brings to an end the dispute between the LADOL and SHI Groups, which has been lingering for a little while and it became critical that it be sorted out.
“Now it has been completely resolved. The key thing is that we have been able to come back together peacefully’ cementing a far stronger joint venture going forward.

” LADOL will continue to invest in and support a range of developments and industries in LADOL Free  Zone from agriculture to green energy, ensuring Nigeria becomes a sustainable industrial Hub in Africa. “

“After many years of legal proceedings that have severely hindered SHIN’s ability to operate in Nigeria and threatened its contribution to Nigerian employment and the economy, this settlement is a definitive statement in favor of SHI-MCI’s right to operate in the LADOL Free Zone.

“In recognizing that Samsung Heavy Industries (Nigeria) lawfully holds 70% of the shares in SHI-MCI, the settlement acknowledges our extraordinary contribution to the LADOL Free Zone and its role in the economic development of Nigeria.

“Before the Egina project, most maritime construction for African oil and gas projects took place outside of Africa.

” Nigeria did not have the capacity to fabricate and integrate an FPSO locally. Thanks to our investment in the SHI-MCI yard, we have established Nigeria as a fabrication and integration hub on the African continent.

“Over six years, SHIN has trained 600 Nigerians from disadvantaged backgrounds in a comprehensive welding qualification programme, in one of the most advanced welding academies in Nigeria.

” This has contributed to 560,000 manhours of training in total. In addition, SHIN has directly employed 2,500 Nigerians with a further 5,000 employed by our suppliers, working in highly specialized skills and roles.

“This has moved the dial in practical terms – with the local contribution rising from sub 1% to over 25%.

” SHIN is deeply committed to ongoing and future project in Nigeria and as part of SHI-MCI, we plan to invest in future projects in the coming years and remain focused on creating and delivering mega deep offshore projects for Nigeria. “

As shareholders of SHI-MCI, both SHIN and LADOL expect a conducive environment for uninterrupted business activities without any disruptions or challenges to operate at the LADOL Free Zone.

Samsung looks forward to achieving its future mega deep offshore projects for the mutual benefit of both parties under SHI-MCI.

SHIN and LADOL commended both NEPZA and NPA for facilitating and achieving this milestone agreement with the promise to ensure that it lives up to its expectations by supporting and monitoring both parties.