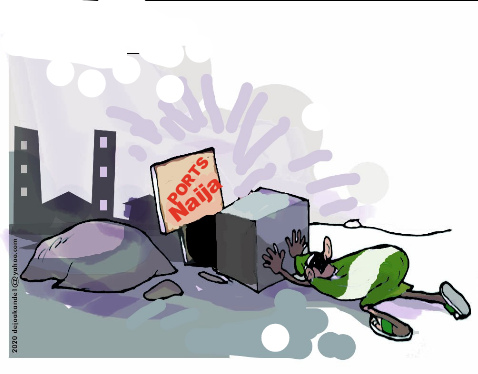 In recent times, the security architecture of the country has come under ceaseless bombardment by insurgents and militants, stretching its security personnel and their expertise to their limit.

Daily attacks by militants, kidnappers, armed bandits and all shades of criminals have become the order of the day.

The whole nation seems to be under siege while the people are in morbid fear of these marauders whose activities and scope of operations defy any geographical restriction.

At first, it seemed their activities were concentrated to one section of the country, but recent happenings have shown that their heinous acts are now permeating through the geographical boundaries.

Though we acknowledge the relentless efforts of our security agents and the unfettered support of government to curtail the menace but we are worried about how secured our port facilities are.

Are the Nigerian ports immuned against the sweeping wave of insurgency and armed banditry?

Our worries may seem ridiculous and far-fetched to some industry stakeholders given the huge, multi-layers security architecture at the ports.

We recognize  the special security arrangement at the port as a security zone which is well fortified through  compliance with various security protocols as espoused by the International Maritime Organisation(IMO), especially the International Ships and ports security(ISPS)Code.

The combined efforts of relevant government agencies at the ports such as Nigerian Ports Authority (NPA), Nigerian Maritime Administration and Safety Agency (NIMASA) which is the Designated Authority (DA) of the ISPS Code, Marine Police and Navy seem to make the port environment almost a fortress.

But sadly, this fortress is not impregnable.

Despite the array of security arrangements, the Nigerian Ports have their fair share of security challenges, especially insecurity at sea such as piracy and sea robberies.

The year 2020 has witnessed a spike in pirate attacks in the Gulf of Guinea while there have been pockets of attacks on the Nigerian waters.

Few years ago, specifically in 2018, vessels were attacked on the anchorage before the concerted efforts of security agents with the active support of relevant government agencies eventually helped to stem the tide.
However, our concern is not on insecurity on waters because we are encouraged by the synergy and concerted efforts of all the port security agencies to arrest the ugly trend.
But our fear is insecurity on land, especially access to the ports.

How secured are our port infrastructure from attacks?

How vulnerable to attacks are port users who daily throng the ports and mill around the ports environment?

How secured are the access to our ports, especially the Lagos ports which are the heart of the Nigerian ports system?

What crowd control measures do the relevant authorities put in place to check or discourage the unrestricted movement of unauthorized persons into the ports which are supposed to be restricted and security zones?
Recently, one of the core stakeholders in the Port industry,  Ascano Russo, the Managing Director of PTML Terminal, raised alarm about the unrestricted influx of unauthorized persons loitering around the port area and asked the management of the Nigerian Ports Authority to check the menace.

He said there was an urgent need to beef up security in the port, especially at this time, to guide against any future attacks on the port.

He was speaking against the backdrop of the recent Endsars mayhem unleashed on most parts of the country, especially the Port City of Lagos.

He warned that the situation at Tin Can Island was still very precarious.

We share the fears of Russo and other concerned stakeholders who are miffed at the numbers of people milling around the ports daily.

We are no less worried about the insecurity on waters but we are convinced of the abilities and capabilities of the designated authority with the support of other relevant security agencies to curtail the menace.

We are equally certain that any possible attack may not come through the sea, which is the exclusive preserve of the dare-devil pirates because the attackers know the almost impregnable security arrangement from that axis.

At the risk of being labeled alarmists, we call on government to give equal attention to security on access to the ports as it gives to the waterways.

Nigerian ports, especially the Lagos ports to us, are vulnerable to attacks due to the topography of the place.

Unlike most of the ports in the world which are far removed from residential areas, Lagos ports have a unique attribute.

The ports are located within residential areas which have abridged their further expansion.

This location, to our mind, exposes the Lagos ports to security challenges, especially the type the country is currently battling with.

The location, which places the ports in constant clashes and competition for survival with the host community, has made the ports vulnerable to possible attacks, especially from the type ravaging the country.

The malignant traffic gridlock at the Lagos ports which has made the place a theatre of confusion and disorderliness further accentuates the problem.

People of malicious intentions could easily slip through the daily bedlam playing out on the access roads, unnoticed, into the ports.

Their entry will be a lot easier as the security agents pay more attention on how much money they could extort from the hapless truckers than to bother with the type of people gaining entry into the ports.

In as much as we do not want to sound as prophets of doom, we urge the government to be proactive and take pre-emptive measures to stave off any possible attack from the land.

As greater attention is on security on waters which is not out of place, it would be unwise not to put up an impregnable security system in and around our ports.

With all these reports of kidnapping, suicide bombing, wanton killings, armed banditry,  relevant government agencies should begin to think on how to monitor movements in and around the ports.

Nigerian Ports have no monitoring and surveillance system nor technologically advanced means or gadgets that can help detect attacks before they are unleashed.

How impenetrable are the ports with the crop of security operatives wielding batons and who can compromise to allow anyone an entry?

Insecurity has grown to a height that has almost dwarfed government efforts at curtailing it.

Just when you think it is being curtailed,  it comes in another dimension, with much ferocity.

Though insecurity is a global challenge, governments of other nations are working so hard to be ahead of the perpetrators.

Can the same be said of Nigeria?

As the insecurity festers, especially now that it is spreading like harmattan fire, government should be proactive in putting necessary security apparatus in place to forestall any unfortunate development.

We call on the Federal Government not to lose sight of the remote chances of the ports being attacked, if left unguarded, by these insurgents who usually look for soft targets where they can record maximum effects.

We are not prophets of doom but merely asking government to be alive to its responsibilities of securing the nation and its people, including the port environment against the new wave of attacks in the country.

It would be stretching lethargy to its breaking point to assume that our worries are misplaced and unfounded.

It would be height of lackadaisical response to dismiss our fears and say they only exist in our imagination as such cannot happen in Nigeria.

American government never, in its wildest imagination, believed 9/11 attacks by terrorists could happen when the terrorists struck at the heart of American security fortress, the Pentagon.

The attacks in France should serve as enough lessons for Nigeria to safeguard the seaports which serve as the gateway to the economy.

Even though our position is far-fetched but in security architecture, nothing is and should be left to chance, especially during this tempestuous time.

A comprehensive monitoring and surveillance system should be put in place at our ports to forestall any unforeseen circumstances and send a strong warning to individuals or groups with sinister motives.

In line with this, we urge the NPA to provide Close Circuit Television (CCTV) at the port gates for close monitoring of people coming in and going out.

In addition, the NPA should introduce electronic access card system similar to the one being operated by the Port and Terminal Multi-Services Limited (PTML) as a means of crowd control.

We are aware that each terminal operator has stringent crowd control mechanism into their facilities; it would not be out of place for NPA to complement such efforts.

The government is also advised to mandate all security agents manning the entrance of all ports, especially the Ports Facility Security Officers (PFSOs), not to compromise their sensitive position that could inadvertently allow enemies of the nation into the ports to unleash mayhem.

The government is advised to deploy well trained and equipped security personnel who are versed in the use of modern security gadgets to monitor movement of people and vehicles in and around the port.

For instance, a security outfit in Nigeria, Perceival Security and Safety Agency (PSSA) recently partners with a Chinese security giant, China Security Technology Group (CSTG) to provide it with training to be able to confront present day security challenges in the country.

The Chinese firm is also expected to provide modern security technological know-how and equipment to be able to provide efficient security service devoid of loopholes.

The partnership of PSSA and CSTG is not meant to provide the usual security trainings but also to provide technologies and gadgets that can beat all the modern day strategies that may be adopted by the criminals.

Without technology, there is little we can do because the criminals today use technology to outsmart the relevant security agents.

So, at the disposal of the government, the resources are limited. Hence, government could avail itself of the security expertise of PSSA/CSTG partnership to fortify our port environment.

PSSA/CSTG partnership will also avail the nation the opportunity  of high-tech surveillance technology as well as other cloud-driven personal and corporate security gadgets that can expose the movement of criminals.

We need this kind of technology because the era of using batons is outdated. We need other things that can assist to make the enemy or criminal know that the person guarding a particular place is well equipped.

We consider it a good option if government could leverage on this innovative security partnership between PSSA and CSTG to complement the existing security arrangement at the port.

Only then could we be convinced that our ports are fortress which is impregnable to attacks from air, land and sea