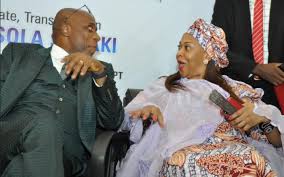 The Federal Ministry of Transportation yesterday accused the Nigeria Customs Service (NCS) of hindering trade facilitation in the country.

Speaking at 2020 Ministerial Retreat in Lagos, Minister of State for Transport,  Gbemi Saraki said that Customs was responsible for the loss of cargoes and accruable revenue to port of neighbouring countries due to the inefficiency of the service.

She also said inability of the service  to automate its operations has led to manual inspection of cargoes, a development that has led to delays and other issues that are inimical to trade facilitation.

“Recently, the Customs declared over N1trillion revenue collected within six months, the question I will like to ask is, at what cost did the Customs collected that much revenue.

“Customs has proven itself to be a hindrance to trade facilitation. We cannot compete because we are not efficient, while Benin Republic and Cote D’ Voire are using scanners, we’re still opening containers and doing 100 percent examination of cargoes”, Saraki declared.