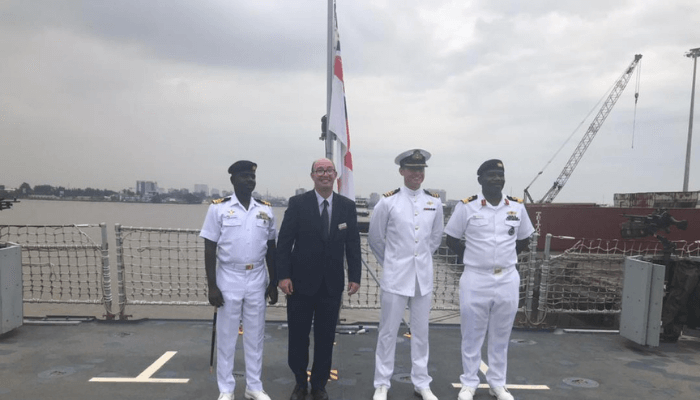 The British warship, HMS Trent and her embarked contingent from 42 Commando have continued to train the Nigerian Navy (NN) and other African partners in the fight against piracy in the Gulf of Guinea.

During the ship’s visit to Nigeria, the Royal Marines Boarding Team trained closely with the Nigerian Navy on all aspects of Vessel Boarding, Search and Seizure, and firefighting demonstrations conducted by her Ship’s Company. This culminated in a 24 hour exercise involving  five Nigerian Navy patrol vessels, putting lessons learnt into practice.

HMS Trent’s Commanding Officer, Commander Thomas Knott said, “I am delighted that TRENT achieved so much engagement with the local community and the Nigerian Military during our visit to Lagos.

” We sailed to conduct combined Maritime Security Operations with the Nigerian Navy in the Gulf of Guinea and to also exercise piracy interdiction operations.
“On behalf of my crew, I wish to pass my sincere gratitude for the generous hospitality we received in Nigeria, we cannot wait to return in 2022.”

HMS Trent also had the pleasure of supporting a reception in aid of Nigerian Wildlife and the fight against climate change ahead of COP26.

UK’s Deputy High Commissioner in Lagos, Ben Llewellyn-Jones said, “We are pleased to see the scale of cooperation and engagement between the UK’s Royal Navy from 42 Commando and the Nigerian Navy.

“This reiterates the UK’s role as a force for good in the world, collaborating with Nigerian armed forces to deal with illegal activities – maritime security, piracy, and illegal wildlife trade – at sea in the Gulf of Guinea.
“Thanks to Commander Tom Knott and the entire crew of the Royal Navy warship, HMS Trent for their visit to Lagos, Nigeria. We do look forward to the next visit.”

Since leaving Lagos, HMS Trent has continued counter-piracy training with the Nigerian Navy in the Gulf of Guinea, as part of Exercise Grand Africa Nemo (EX GANo).

EX GANo gathered 10 allied nations with the aim of developing 19 of their African counterparts in all areas of maritime security.

The Royal Navy have also worked with the Togolese National Navy and Benin Navy in Search and Rescue and counter narcotics operations.

Following the exercise, HMS Trent will carry on her three-month deployment with a port visit in Ghana where her Ship’s Company will continue to develop the Ghanaian peacekeeping capabilities while also supporting their effective response to national security concerns.

Later in November, TRENT will be alongside in Senegal to help promote the UK’s position as co-president at the G7++ Friends of Gulf of Guinea conference.