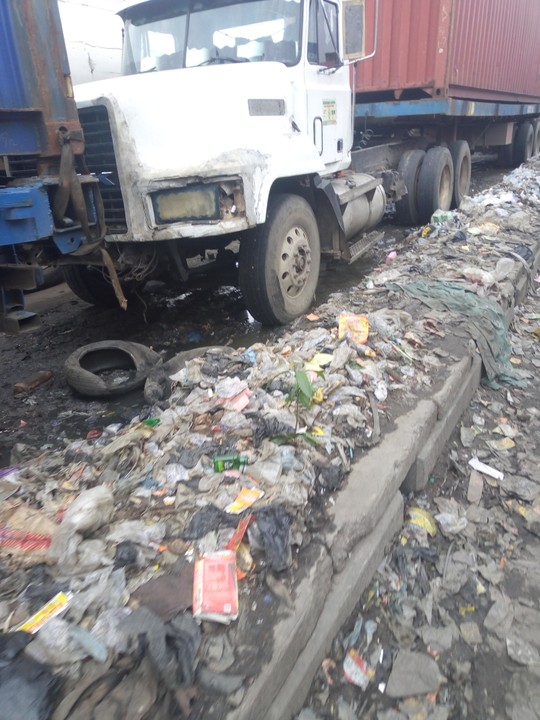 By Otunba Bright
Port users and  residents of Apapa have lamented the indiscriminate open defecation by truck drivers and Okada riders operating along the port corridors.
Port users and residents, who condemned  the unwholesome act, blamed Government for neglecting Apapa community to deterioate to the level it is today.
A clearing agents, Mattew Kachi, said that both truck drivers and Okada riders have turned every street in Apapa into public toilet.
He lamented that nobody was doing anything about these people who have turned everywhere into public toilet.
“Port authorities are talking about modern ports everytime. But our port settings are not fit into that of modern port. You can’t compare Ghana port with any of the Nigerian ports. They are orgainsed and they have toilets and canteen at the designated points.
“But look at our ports, no public toilet and everywhere is dirty. People will just wake up one day, find any available space at the port corridor, place a tent and start food vendor business. We don’t even know who is in charge anymore. Everybody just doing what they like,” he lamented.
Speaking at Apapa recently, the Chairman of Apapa Residents Association, Prince Aderemi Olikuntuyi, said that the truck/tanker drivers and okada riders  take advantage of gridlock in Apapa to perpetrate the ungodly acts.
He said that the association had made frantic efforts to stop truck/tankers drivers from turning their roads to public toilets  but were met with resistance and there were no public toilets for the drivers.
“First, it is the nuisance of tanker and truck drivers who pack their vehicles indiscriminately along the major roads leading to Apapa especially on the overhead bridges, thereby causing serious traffic jam.
” Apart from this, these tanker and truck drivers litter the whole of the environment with faeces and urine,  making the area filthy and disgusting.
“To effectively and efficiently tackle such a menace, it is advised that the Lagos State Government should immediately step into this issue.
“The issue is not one to be left entirely in the hands of the federal government.  Also, in order to prevent an outbreak of a pandemic in Apapa, there is need to provide functional public toilet.
“Second, the menace of the so-called Okada riders who are predominantly foreigners sleeping on their bike in the open at night.  They have no place to sleep so they sleep on their bikes (okada) in the street in numbers, which is now a threat to the life of Apapa community residents.
“Given that Apapa is the hub of economy and commerce in Nigeria, we call on the Lagos State government, the Federal Minister of Transport, the Federal Minister of Works and Housing and the Presidency to jointly and urgently address the situation in the Apapa community and its environs in order to arrest the situation from further degenerating and restore activities to normal,” he lamented.
Also speaking, the Baale of Apapa, Otunba Akeem Ogbara added that government needs to take the issue of Okada riders in Apapa very seriously because majority of them are foreigners with no means of identification.
“The Okada people around this community, we don’t know where they came from, and their Okada have no plate number and we don’t even know where they sleep. They usually sleep on their Okada.
“There was a time the police were trying to profile them. They were asked to come for profiling, some of them refused and police were trying to address them, unfortunately, there was a call from the Inspector General of Police that they should be released. It is really frustrating.
“The people that we don’t know and we try to put them together and trying to organise how we can do it in order to identify them but these people are connected up to Inspector General of Police.
There was a time police arrested them when they refused to come for profiling and a call came in from the IG that they should release them. So government should try and look into our problems here about these Okada people.
“It is really scary because Okada will just pick somebody up and there is no plate number to identify them and if you see them they are really dirty,” he added.
He lamented that Apapa is very dirty, everywhere is littered and nobody is taking care of the environment, which is dangerous for people’s health.
However, Gibraltar Njowusi lamented that there is no water system and there is no toilet in Apapa, adding that the whole environment is endemic as the trailer drivers defecate openly on the street.
According to him, majority of the Okada riders are sleeping on their Okada, which is a security threat to those living in Apapa. He called on government to look inward and address the challenges facing the Apapa community and its residents.