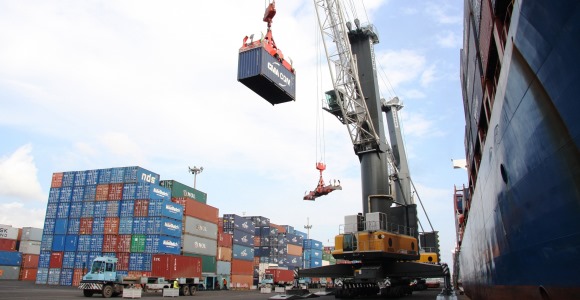 Abiola Seun   |As yuletide approaches, over 50 vessels set to discharge various Christmas and new year consignments at Tin-Can island port complex, Lagos are stranded at anchorage while several thousand containers are trapped at various terminals in the seaports.

The congestion has increased turn around time of vessels and affected clearance of cargoes at the seaports.

Investigations have however shown that the over 50 vessels stranded at the anchorage are paying several thousands of dollars to secure their vessels againt pirate attacks at Anchorage.

The Managing Director of Ports & Cargo, John Jenkins, confirmed the development, adding that  high numbers of vessels are stranded at anchorage even as he said there is a long waiting time for ships at Tin Can Island Port.

According to him, the poor state of the road which contributed to slow process of cargo evacuation at the terminal has trapped containers at the port

According to him, “There are over 40 vessels at anchorage at the Tin Can Island Port. At Port & Cargo, we could only bring seven alongside now. Last month, we kept one of the Mediterranean Shipping Company (MSC) vessels there for four days because they could not discharge and this month, we have kept vessels for more than two days already because we don’t know where to put the containers.

“I have worked in this port industry all my life; I have never seen roads like this. We could form a palliative solution. We are not happy; people are losing their means of livelihood everyday because of the poor condition of the road.”

Also, the president of the Edo Maritime Club (EMC) Mr Edeigba Thomas Nelson has lamented that owing to the congestion caused by the poor port access roads, consignments meant to be delivered for Christmas are still trapped at the Lagos seaport.

Edeigba noted that the time bound goods are stuck in the port as clearing agents find it difficult to clear the containers due to the commatose state of the port access road.

He informed that about 85 of his cargoes are trapped at the seaport with only 26 out while others are still yet to be cleared, and lamented that many of the goods are time bound.

“So the port access road is the general problem that we have. The cost of transportation to move a cargo outside the port is too high, and it’s already falling back to the final users through inflation.

“Secondly most of these Christmas goods are stuck at the port that we are not able to bring out.

“The reason is because of the congestion caused by the access road and the Presidential Task Team is not helping matters, we hope all of these are resolved soon” he said.

Meanwhile, the Nigerian Shippers’ Council, (NSC), has hinted on the suspension of demurrage and storage to ameliorate the sufferings and loss of shippers.

Executive Secretary NSC, Mr. Hassan Bello said the terrible condition of the roads has made it impossible for shippers to clear goods from terminals within the three days allowed as well as return empty containers within 4 days.

The condition of the roads has resulted in a standstill traffic around the ports, thereby frustrating the ability of the shippers to evacuate cargoes from the port as well as return empty containers.

Also, the Minister of Transportation, Rotimi Amaechi, on Friday inspected the Tin Can Island port and reiterated the need for an urgent solutions to curb trucks blocking access roads to the ports towards achieving the clearing of goods on time with less human contact.

He, however, said he would meet with all relevant agencies on Jan. 19 to find a permanent solution to the challenges.

Speaking, the NPA boss said that by January 2021 an electronic clearing system for cargoes would be introduced that would resolve the issue gridlock at the Port.

According to her, the agency is working with Lagos State government to create truck parks at designated areas.

She said that the Lagos State government plans to give a designated truck park at Orile where trucks will park until their cargo is cleared electronically before they can proceed into the port.

“We are planning to deploy an E-call-up system in January 2021. We will provide an electronic call-up system within the Ports and designation truck parks. No more trucks parking randomly on the road, we are going to have a designated trucks park; when you are called upon you can enter the Port.

“The electronic call-up system will be across all platforms on phones. You can monitor when the consignment arrives and when you have been assigned to pickup  your  cargo. The E-call up will also remove human intervention and eliminate corrupt practices.”

She said that the only thing that would be needed for clearing is the barcode that would be scanned at the entrance of the port to enable them enter the port.