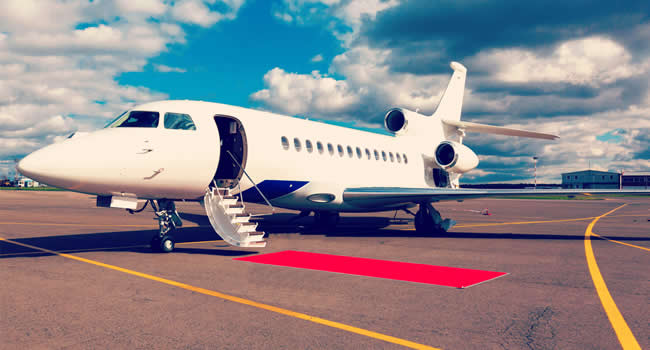 The Nigeria Customs Service (NCS), has threatened to detain private aircraft that failed to carry out verification after expiration of the exercise on Tuesday 6th July, 2021.

The National Public Relations Officer of the NCS, Joseph Attah, in a press briefing in Abuja on Monday said two weeks into the 30-day verification period, only six owners of private aircrafts have presented their imports document for verification.

Recall that the NCS had on May 31st directed all private jet owners in the country to present relevant importation clearance documents to the agency from June 7 to July 6, 2021 for verification amidst concerns they are not paying taxes.

Attah, who said the essence of verification is to unearth certain things, urged those who are yet to carry out their verification to do so, warning that the Service will not hesitate to invoke appropriate sanctions.

“Two weeks into the 30 days verification period, only six owners of private aircrafts have responded to the invitation necessitating this update and reminders to those who have not responded to do so in order to avoid possible detention of their aircrafts.

“The Service believes that owners of private aircrafts are highly placed individuals who will be willing to comply with extant laws of the land governing importation of the aircrafts they owned.

This compliance includes payment of all appropriate duties and taxes.

“As agency of government responsible for enforcement of laws governing imports and exports in Nigeria, NCS will not hesitate to invoke appropriate sanctions on any defaulting private aircrafts owners immediately after the expiration of the verification period on Tuesday 6th July 2021.

“For the avoidance of doubts, private aircraft owners or their representatives are to report to room 305 Tariff and Trade department, NCS headquarters, Zone 3, Abuja from 10 am to 5pm between Monday 7th to June to Tuesday 6th July 2021.
“Please note that the documents sought for verification include Aircraft Certificate of Registration, NCAA’s Flight Operations Compliance Certificate, NCAA’s Maintenance Compliance Certificate, NCAA’s Permit for Non-Commercial Flights and Temporary Import Permit (where applicable),” he said.
Noting that the ongoing verification is not intended to inconvenience any private jet owner, Attah maintained that the exercise is to ensure that all privately owned aircrafts in the country were properly imported and cleared with all appropriate taxes paid,” he said