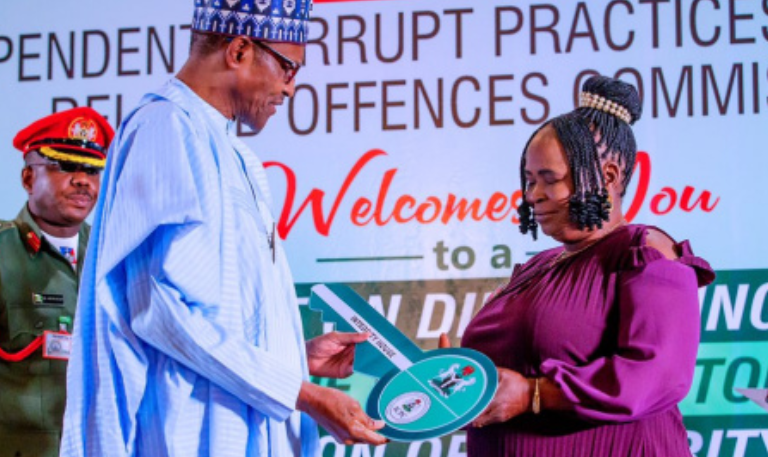 Aside Abubakar, Mrs Josephine Ugwu of the Federal Airports Authority of Nigeria was similarly celebrated for exhibiting Integrity in the performance of her official duty.

Buhari presented the awards to the recipients at the opening of two-day National Summit on Diminishing Corruption in Public Sector held at the State House old Banquet hall, Abuja.

The event is being organized by the Office of the Secretary to the Government of the Federation in collaboration with Independent Corrupt Practices and other related offences Commission (ICPC).

Abubakar, who is now an Assistant Comptroller-General of Customs, rejected 412,000 dollars (N150 million) bribe offered to him by drug traffickers to import 40 containers laden with Tramadol, a controlled and highly addictive drug through Apapa port .

Ugwu, a former cleaner at the Murtala Mohammed International Airport (MMIA), Lagos had on different occasions returned millions of naira found in the course of her duty, including the sum of N12 million dollars forgotten in the toilet by an airport user.

Speaking at the event, Buhari stressed the need for Nigerians to uphold the traditionally cherished values of honesty and integrity.

Buhari called on the National Assembly to fast-track the passage of the Special Crimes Court Bill.
He also urged the judiciary to embrace and support the creation of the Special Crimes Court.
He said, “The fight against corruption is of course not only for government and anti-corruption agencies alone. All arms and tiers of government must develop and implement the anti-corruption measures.

“I invite the legislative and judicial arms of government to embrace and support the creation of Special Crimes Court that Nigerians have been agitating for to handle corruption cases.”
Buhari noted that the passage of the bill was a “specific priority” of his administration’s Economic Recovery & Growth Plan 2017-2020.

The President also used the occasion, which marked the launch of the Constituency Projects Transparency Group (CPTG) Report Phase One, to reiterate his appeal to all well-meaning Nigerians to join in the fight against corruption.

“I also urge our development partners, civil society organizations, and the media to continue to support our efforts to strengthen ethical values and integrity in Nigeria,” he said.