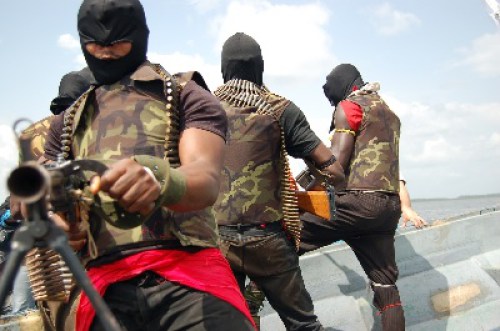 —-as IMB reports spike in attacks at Gulf of Guinea

A Container ship, MAERSK CARDIFF was on Wednesday night, January 13th attacked in Port Harcourt’s Southwest, at around 20.00 UTC.

This attack showed that Nigerian waters are still deadly porous, despite Federal Government’s efforts to end maritime crimes
.
The ship was en route from Tema Port in Ghana, even though the port of destination was yet to be known.

Unconfirmed reports highlighted that the vessel gallantly took evasive action, fought off the pirates and continued its journey when it was first attacked.

But the dreaded pirates later regrouped, mobilized and again attacked the vessel at 0000 UTC Jan 14, and this time around, probably boarded it.
“She was probably, boarded”, a report by Fleetmon indicated of the second attack, adding that as at 0230 UTC Jan 14, the MAERSK CARDIFF was already drifting near the attack site with Nigerian security boat at her side.

It was further learnt that the Automatic Identification System (AIS) was still on.

In the meantime, the International Chamber of Commerce’s International Maritime Bureau (IMB)’s annual piracy report recorded an increase of piracy and armed robbery incidents in 2020, even as it specifically noted Incidents rise in the Gulf of Guinea.
The report indicated that In 2020, IMB’s Piracy Reporting Centre (PRC) received 195 incidents of piracy and armed robbery against ships worldwide, in comparison to 162 in 2019.
The incidents included three hijacked vessels, 11 vessels fired upon, 20 attempted attacks, and 161 vessels boarded. The rise is attributed to an increase of piracy and armed robbery reported within the Gulf of Guinea as well as increased armed robbery activity in the Singapore Straits.
Incidents rise in the Gulf of Guinea.
Globally, 135 crew were kidnapped from their vessels in 2020, with the Gulf of Guinea accounting for over 95% of crew numbers kidnapped.
A record 130 crew members were kidnapped in 22 separate incidents.
Since 2019, the Gulf of Guinea has experienced an unprecedented rise in the number of multiple crew kidnappings. In the last quarter of 2019 alone, the Gulf of Guinea recorded 39 crew kidnapped in two separate incidents.
“Incidents in the Gulf of Guinea are particularly dangerous as over 80% of attackers were armed with guns”, according to the latest IMB figures.
All three vessel hijackings and nine of the 11 vessels fired upon in 2020 related to this region. Crew kidnappings were reported in 25% of vessel attacks in the Gulf of Guinea – more than any other region in the world.
Once kidnapped, the crew are removed from their vessel and can be held onshore until their release is negotiated. The furthest crew kidnapping in 2020 occurred almost 200 nautical miles (NM) from land with the average kidnapping incident taking place over 60NM from land, according to IMB.
The rise in kidnapping incidents further away from shorelines demonstrates the increasing capabilities of pirates in the Gulf of Guinea.
Given these developments, IMB advises vessels in the region to remain at least 250 NM from the coast at all times, or until the vessel can transit to commence cargo operations at a berth or safe anchorage.
“The latest statistics confirm the increased capabilities of pirates in the Gulf of Guinea with more and more attacks taking place further from the coast.
This is a worrying trend that can only be resolved through increased information exchange and coordination between vessels, reporting and response agencies in the Gulf of Guinea Region.
“Despite prompt action by Navies in the region, there remains an urgent need to address this crime, which continues to have a direct impact on the safety and security of innocent seafarers,” said Michael Howlett, Director of the ICC International Maritime Bureau