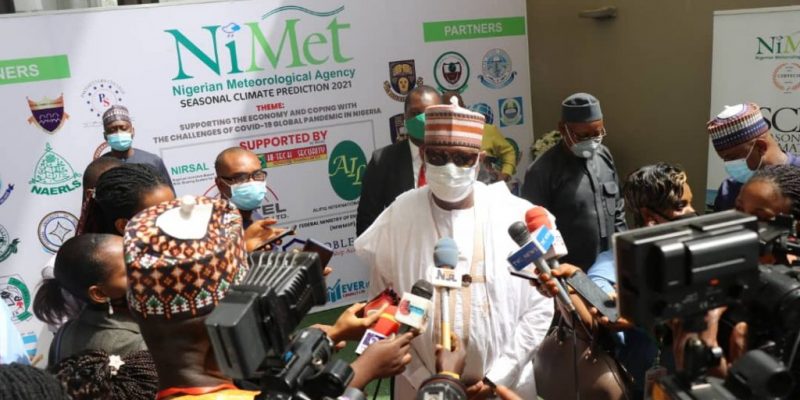 Stakeholders in the nation’s aviation sector have called on the federal government to commercialise the Nigerian Meteorological Agency (NIMET) over paucity of fund bedeveling the agency.

They argued that NIMET,as a world class meteorological agency, cannot be allowed to suffer financially after investing huge sums of money in equipment acquisition.

Speaking, Comrade Olayinka Abioye urged the Minister of Aviation, Senator Hadi Sirika to deduct the debts from sources from such agencies.

Abioye, the immediate past General-Secretary of state NUATE, noted that critical services rendered by NIMET should be paid for by the end users.

He called for the commercialisation of the agency to enable it generate revenue to pay salaries and maintain its facilities.

“I recall that I participated in the review of the Act establishing NIMET and we approved and recommended that critical services being rendered by NIMET should be paid for by many of the end users and therefore advocated for the commercialisation of NIMET to enable her earn revenue from end users such as universities, aviation agencies/companies, agricultural enterprises and the ministries of agriculture in both States and at the federal level, construction companies etc”

Abioye noted that when these bodies were dependent on the critical services of NIMET, they should be made to pay for services rendered as it will go a long way to help the agency.

Abioye advocated for the review of the current sharing formula among the agencies, through the Nigerian Civil Aviation Authority (NCAA), and the National Assembly so that agencies hitherto undervalued can have a new lease of life.

He noted that with the nature of NIMET operations and members of staff scattered all over the country, appealed to NIMET boss to work with the Minister to get conducive offices, work tools, operational vehicles among others for members of staff.

“However, for this to be fully achieved, NIMET must strive to extricate itself from the apron strings of the Accountant Generals office since the FG pays salaries and fund NIMET.

“It must be a self accounting body like others and encouraged to create the legal parameters to pay itself and take other sundry responsibilities without handing on the AGs office”.

Abioye said  NIMET with two great training schools, which are  by international standards, required regular improvements in infrastructures and patronage and emphasis should be placed on updating their facilities and faculties.

“Since foreign students are invited, it should not be lost on us that all necessary tools of work and training infrastructure should be provided.”

The General Secretary of Association of Nigeria Aviation Professionals (ANAP), Comrade Abdulrasaq Saidu said the condition of service of the agency ought to have to be reviewed and implemented as NIMET remained the least paid agency in the aviation sector.

Saidu, noted that the problem of NIMET was lack of transparency and divide and rule in order to split the unions and wants the agency to handle it salary payment as the agency has greatly expanded.

He noted that with the expansion, government should allow it to generate its revenue, adding that at present, 90 percent of its revenue was from NCAA.

On his part, the General Secretary of NUATE, Comrade Ocheme Abah  called for improved welfare package for staff as it was in its abysmal levels in NiMet.

“The Agency remains the least paying in the Aviation industry which is at odds with it’s critical role it played in the industry. Without urgent intervention, we are headed directly on the path of serious industrial upheaval. We are presently sitting on gunpowder sure to inflame shortly”

Abah called for urgent resolutions to challenges facing the agency to enable it forge ahead.

Bello hands over to Ezedinma as acting Executive Secretary

Ever Given Owner reaches settlement with Egyptian authorities