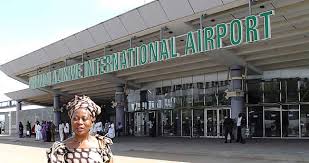 It was gathered over the weekend that flights couldn’t land at the Lagos airport and this continued at the time of filing this report as other airlines were also diverting Lagos flights on Saturday and Sunday for the same reason.

Aviation stakehders have urged the Federal Airports Authority of Nigeria (FAAN), to repair the faulty lighting, saying the non functional runway lighting is an embarrassment to Nigeria, the giant of Africa.

They, however, expressed worry that the faulty runway lighting may have been extended from domestic runway  to international runway, saying passengers who are supposed to arrive from other countries into Lagos over the weekend are currently stranded in Abuja airport over inability of foreign airlines to land at Nigeria’s mega city airport at night.

For instance, on Friday, British Airways sent a message to its passengers that its Friday flight from London to Lagos had to divert to Abuja airport due to local infrastructure issues in Lagos.

The message reads, “BA075 Lagos – We’re very sorry your flight to Lagos had to divert to Abuja due to local infrastructure issues in Lagos. Your new estimated departure time is on 19th June at 12:00 local time, arriving into Lagos at around 13:30 local time.

” Transport from the hotel will depart for the airport at 08:00 local time. Please continue to check ba.com/flight status.”

She said, “The spare parts arrived and work has commenced this morning to replace the faulty lightnings,” she said in response to enquiry.