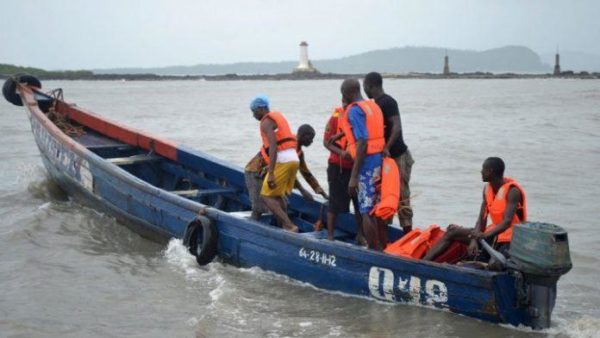 Tragedy was yesterday averted at the Topo waterways in Badagry area of Lagos State, as a commercial boat collided with a fishing boat, injuring the fisherman.

Speaking to newsmen, the Chairman, Association of Badagry Fishermen,Mr Sunday Ayedogbon said that the fisherman was fishing when the boat capsized his canoe.

Ayedogbon said the fisherman, who happened to be his son, Sejiro, a 22-year-old student of Osun State Polytechnic, left home around 10 a.m. to fish on Badagry waterways.

“Few minutes later, I received a telephone call from someone that a commercial boat going to Apapa has run over his canoe, breaking it and my son was nowhere to be found.

“I mobilised some guys and we took a boat and went in search of him, but when we got to the scene of the incident along Administrative Staff College of Nigeria, the current had moved the wooden canoe to Naval base side.

“The victim was lucky to be holding on to the spoilt canoe for survival.
“He was immediately rescued and rushed to a private hospital for treatment.

“Sejiro was lucky because immediately the speed boat claimed his wooden canoe, he jumped out, holding his canoe and it was this that saved him from drowning,’’ he said.

Ayedogbon said the incident was a surprise to him because it was in broad day, adding that the boat operator could not claim he did not sight the fisherman from 15kilometres away.

Commenting on the incident, Mr Ibrahim Famuyiwa, Lagos State Waterways Authority’s Head of Operations said the incident was a sad one.

Famuyiwa said the authority would definitely sanction the boat operator involved.
He said the authority was doing its best to ensure safety on waterways.
“From time to time, we have been having challenges with fishermen and boat operators on waterways.
“The fishermen claim that they are the custodian of waterways because of their fishing activities.
“But now with the state looking at improving transportation system with ferries and boats, we now have new stakeholders on the waterways.
“There is no way the fishermen can use the entire waterways for fishing exploits without considering other stakeholders.
“We have advised the fishermen to reduce their fishing activities to night while the boat operators should also stop work by 7 p.m,’’ he said.