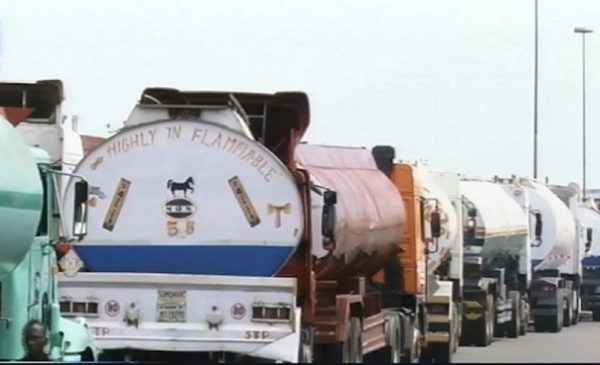 The Ogun one Command of the Nigeria Customs Service, Idiroko yesterday said it intercepted nine trucks of Premium Motor Spirit (PMS) also known as petrol set to be smuggled out of the country to neighbouring Benin Republic

According to him, the seizures which were made in the last three months also included 86 units of used vehicles 1,225 litres of diesel as well as 75 litres of kerosene.

He however disclosed that despite attack on Customs personnel during the #EndSARS protest, they were still able to intercept contraband to be smuggled into the country.

“Following the recent nationwide #EndSARS protest hijacked by hoodlums and smugglers particularly at the border areas, many of our patrol teams were attacked, patrol bases were vandalized and set ablaze. Our Officers and Men were trapped as a result of the multiple attacks suffered along Oja-Odan, Ilaro (along Ilaro/Oja- Odan/Obele border), Ihunbo, Adisba, Owode (along Idiroko axis), Ijoun and Imeko. Many of our personnel’s belongings including uniforms and other valuables were looted. Many of our patrol vehicles were vandalized.

“As what seems to be a premeditated action, the said hoodlums/smugglers in large number seized the opportunity of the security challenge which made all security agencies focused on protecting their operatives and facilities at that period embarked on massive smuggling of rice and vehicles for about three days.”

Deapite the attack, the CAC said the command intercepted 2,947 bags of smuggled rice and 18 units of tokunbo vehicles.

Others are 19 cartons of insecticide, cannabis, vegetable oil among others.

“Despite the precarious situation experienced recently by the Command, we will continue to dialogue, engage, sensitize and educate the public on social/economic implication of smuggling as well as performing statutory function of enforcing compliance in line with government fiscal policies.”

“We wish to reiterate that the continued attack on operatives of NCS and other sister agencies will not deter us from the continued performance of our legitimate duties. Permit me to use this opportunity to appeal to parents and guardians to prevail on their children, wards and youths to desist from such criminal acts such as smuggling and attack on Security agencies.

” It is important to note that activities embarked upon by the Command is a patriotic duty in the interest of national security and economic wellbeing of Nigeria,” he said.