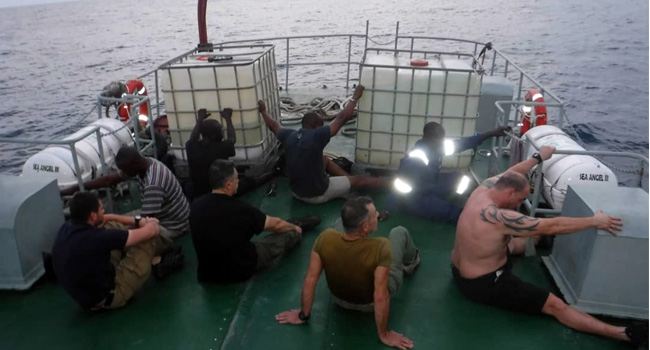 The Acting Managing Director, Nigerian Ports Authority (NPA), Mohammed Bello -Koko has sought the support and cooperation of the newly appointed Assistant Inspector General of Police, Maritime as well as Nigerian Navy to end cases of attacks on vessels, barge operators and other port facilities around the waterfronts and channels.

The authority also charged the Federal Road Safety Corps (FRSC), on the need to clear all encumbrance and bottlenecks that impede free flow of traffic on all port corridors with a view to ensuring efficient and effective handling of cargo in and out of the nation’s seaports.

Bello spoke during a meeting between the AIG Maritime, Amadi John Ogbonnaya, officials of Lagos State Government Commander of the NNS Beecroft, Commodore Bashiru, Mohammed and Sector Commander of the FRSC, Matthew Cyril Zango, among others government agencies in the maritime industry.

According to the Koko, there was urgent need for the AIG Maritime and indeed other security agencies to assist the authority in addressing the rising cases of attacks on vessels, barge operators and other port facilities especially around the waterfronts and the channel areas.

He also sought the support of the AIG in helping to address the persistent complaints by stakeholders over extortion, illegal mounting of roadblocks by uniform personnel from the security agencies, associations and unions, all of who operate along the seaport corridors comprising also Tin Can-Coconut, Mile 2, Orile, around the SIFAX Terminal on Ijora-Olopa as well as Police Area B, Wharf and Creek Roads, among others.

He added that efforts are being intensified to dismantle all illegal check points  with a call to truck drivers to resist extortion.

“I wish to use this opportunity to thank the Lagos State Government, the FRSC and the PAPC of the Lagos State Police Command for their support and collaboration with the NPA on the enforcement of the Electronic Call-Up System, called ‘Eto’ and the Clearance Operation.

“The authority would like the AIG to use his good office to assist in the following areas of interest or concern; strengthening the existing collaboration between the Lagos State Police Command and the PAPC, assist in the challenge of persistent complaints by stakeholders of extortion and erecting illegal roadblocks by uniformed security operatives from government security agencies, unions and associations on Port corridors.
“Other issues requiring the AIG’s urgent attention include assist in follow-ups with the Force Headquarters Abuja for additional maritime Police personnel/gunnery to enable the authority commission its newly acquired patrol boats.
“To assist in the follow-up for the establishment of Marine Police units in Calabar and Delta Ports respectively”, Bello Koko said.

The NPA MD, who warmly welcomed the new AIG, congratulated him on his recent elevation, said the NPA management looks forward to working with him and to improve existing relationship between the authority and the Police high command.

In another development, Koko has said the authority was willing to collaborate with maritime stakeholders in order to ensure the success of the electronic call- up system, known as the ‘Eto’.

Speaking during an interactive session with stakeholder held at the authority’s corporate headquarters on Marina, Lagos, Koko disclosed that security agencies, stakeholders and the Lagos State Government have agreed to streamline operational procedures to curtail extortion and sharp practices that hamper the enforcement of the truck traffic management at Apapa and the entire Maritime logistic Ring (MLR).

He said: “The management of the NPA, is seeking more partnership from the authority’s vast stakeholders towards stimulating the ETO, the electronic call up system to considerable success.

“There is therefore the need for all security agencies as well as operators to rub minds, share information on the subject of ETO and the truck traffic management in Apapa in relation to proffering solutions to the gridlock in the Port  environment.

Bello Koko said the NPA, would always keep up to its responsibilities, therefore it would not relent especially with synergies in sailing the authority to an expected height.

FG, Korea collaborate to end piracy in Gulf of Guinea