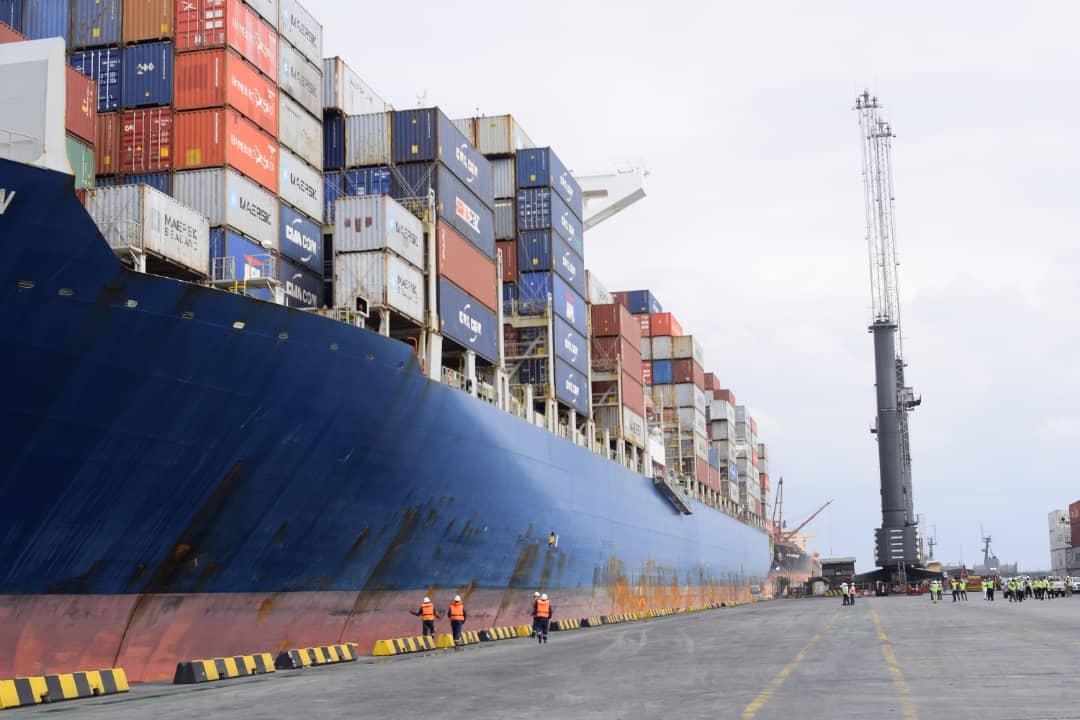 Funso Olojo.  |.
The Nigerian Ports Authority (NPA) may have finally broken the apathy of Nigerian importers for Eastern ports with the historic voyage of a jumbo Maerskline Stardelhorn vessel to the West African Containers Terminal (WACT), Onne port.
The voyage was historic because that was the first time ever in the history of 66 years of  NPA to attract such a jumbo vessel to any of the Nigerian ports.
The statistics of the vessel is frightening and intimidating.
The Maerskline Stardelhorn vessel has a length of 300 metres and width of 48 metres.
This is almost the size of three standard football  fields.
According to FIFA rules, the standard length of a football pitch should be between 90-120  metres while its width is from 45-90 metres.
The vessel has a capacity of 9,971TEUs, that means a capacity to carry 9,971 containers of both 20  and 40 footer.
The only vessel which came distant close to this was the Maerskline’s West Africa Maximum (WAFMAX) vessel that berthed at the same Onne port in 2014 with a capacity of 4,500 TEU.
So at 1620 hours on Saturday, August 15th, 2020 when the massive vessel berthed at Onne port, the  NPA effectively announced the readiness of the Eastern ports to receive  Nigerian importers and other similar jumbo vessels.
Over the years, importers have shunned the use of Eastern ports, citing security challenges, among other reasons.
Not even the mouth-watering incentives in form of concessions offered by the NPA would wean them from the congested Lagos ports.
Curiously, they have preferred the use of the Lagos ports despite the multi-faceted challenges of cargo glut, bad roads and obvious economic losses for importers whose cargoes are still destined for the Eastern, South South and Northern axis but still prefer to transport them at huge costs.
Similarly,  bigger vessels were reluctant to visit the Eastern ports due to security concerns and low draught of the channels.
They usually imposed surcharges on importers whose cargoes were destined for the axis.
The “conspiracy” between the importers and foreign liners against the Eastern ports for several years made the ports in that axis to function below their capacity.
The problem even got the attention of the National Assembly members who expressed deep concerns and had to tour the ports in the axis to engage stakeholders who were equally disturbed by the dwindling fortunes of the Eastern ports.
All these anxieties and concerns seemed to be over as the historic call of Maerskline Stardelhorn may have addressed all that.
The NPA, sensing the furtility of trying to lure importers with incentives to patronise the Eastern ports, decided to take the bull by the horns with its deliberate efforts to upgrade the facilities at the ports through constant maintenance dredging and provision of other infrastructure.
According to Adams Jatto, the General Manager, Corporate and Strategic Communications, NPA, since the agency could not force importers to use the Eastern ports and had consistently rebuffed all attempts to convince them to patronise the axis, NPA had to embark on massive upgrade of the infrastructure at the ports.
“Since NPA could not force importers to patronise the ports at the Eastern axis and since we have to equally put the ports into productive use, the only thing we could do is to create an enabling environment that will bring both the liners and importers to patronise the ports. And that is what we have done”
“We  have deepened the channels through constant maintenance dredging.
“The NPA management is also concerned to made the port access roads in the axis, especially the Port Harcourt-Onne road as well as the link roads to neighboring towns, motorable for east access of importers with their goods”, said Jatto.
He revealed that, towards this end, the agency was collaborating with the Ministry of Niger Delta to ensure all these ports access roads and other trunk A roads in the region are fixed.
In the same vein, the agency is discussing with the Ministry of Works and Housing on the need to made all the Federal Government roads that link the Eastern ports to other adjoining states accessible.
Jatto said this collaborative efforts by the agency are similar to what the NPA management made in the Western ports.
Stakeholders are as excited as NPA about the importance of the historic  voyage for which they commended the agency for its untiring efforts to made the Eastern ports breath again.
Rev. Jonathan Nicol, the Chairman of  Shippers Association of Lagos State and Chief Osita Chukwu, the Coordinator of Save Nigeria Freight Forwarding Group, both believed that the development will not only decongest the Lagos ports but also boost the confidence of importers to patronise the Eastern Ports.
Apparently, the NPA wanted to kill two birds with one stone.
With the successful berth of the Maerskline Stardelhorn vessel at Onne ports, the agency has triggered off a  flurry of activities at the Eastern ports and at the same time made attempt to lure away importers from  the Western Ports of Lagos in a bid to decongest the bustling terminals which are congested.
To underscore the deliberate efforts of the NPA to restore the confidence of Nigerian importers and the shipping community back to the Eastern ports, the jumbo vessel with a depth of 11.2m could have conveniently been accommodated in the Lagos waters that have the depth of 14.5m.
But NPA chose to take it to Onne port with a draught of 12m.
This shows the audacious intention of the NPA to made the Eastern ports breath again.

Customs, other security agents mount over 700 roadblocks between Lagos and Bayelsa — Osita Chukwu