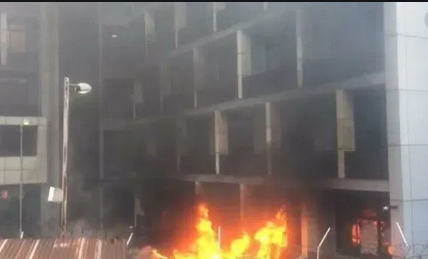 Abiola Seun    |
Several hours after suspected hoodlums who masqueraded as #ENDSARS protesters torched the nine-storey Headquarters building of the Nigerian Ports Authority (NPA), the authority of the rich parastatal has kept sealed lips on the unfortunate incident.
Attempts to get the reactions of the General Manager, Corporate Communications, Engr. Adams Jatto proved abortive as he promised to get back to us several hours before we went to the press.
However, details of the arson revealed that several workers of the  NPA escaped death as some part of the building housing the authority headquarters was razed by protesters campaigning against police brutality and misgovernance in Lagos.

The fire, which sources said has been brought under control, started around 10am on Wednesday morning and touched over five floors of the nine-storey building sited at Marina, Lagos.

Speaking to newsmen, a source in the agency said protesters, numbering over 50, invaded the authority’s headquarters, setting it on fire. However, an official statement from the agency is still being awaited at the time of filing this report.

Arson on NPA headquarters, a ploy to cover up fraud—Maritime Journalists allege