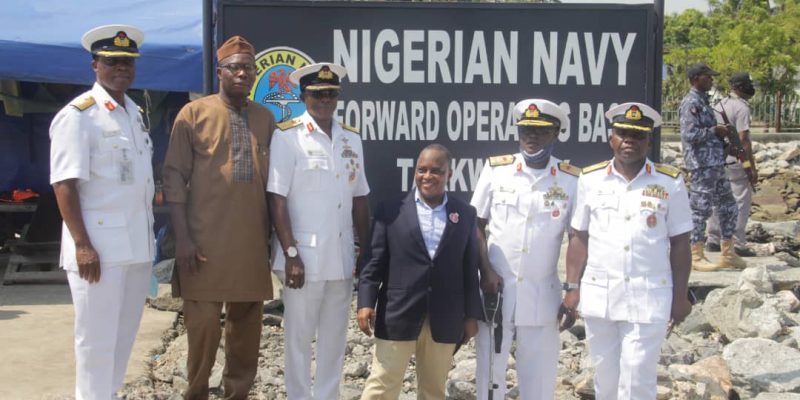 The Nigerian Port Authority (NPA)  has handed over 18 hectares of land at Tarkwa Bay to the Nigerian Navy for the establishment of a Forward Operating Base.
The ceremony was held at Tarkwa Bay Island recently.

Prior to now, the issue of a Forward Operation Base had lingered between the NPA and NN for some time.

The Flag Commanding Officer, Western Naval Command represented by the Chief Staff Officer, Rear Admiral Tanko Pani, assured that the land would be used by the Nigerian Navy judiciously for the purpose for which it was given and checkmate the rise of criminal elements.

He said, “It is a shared vision that the proposed base will further checkmate the nefarious activities of criminal elements and other miscreants on the high seas and on Tarkwa Bay Island, while enhancing the safety and security of navigation within our waters in line with our collective mandate.”

Pani explained that the Tarkwa Bay Island had been under siege due to the activities of the unpatriotic Nigerians who carried out piracy and vandalism of the NNPC pipeline, as well as involve in other criminal activities which necessitated the authorisation of ‘Operation Kurombe’ by the defence headquarters.

According to him, the operation had dislodged the criminals and their collaborators from their hideouts outside the island, and also helped in the arrest of some suspected vandals, confiscation of nine trucks of which six were fully loaded with siphoned petroleum products from the NNPC pipelines earlier.

The General Manager, Lands, NPA, Ahmed Yusuf, in his remarks, said that the discussion on the Forward Operating Base started since 2010 between the NPA and the Nigerian Navy.

“We are pleased with the partnership we have with the Nigerian Navy, it has been a long one and we believe that the establishment will go a long way to strengthen the relationship between both parties in securing the facilities,” he said.

Yusuf also hoped that ceding the land to Navy would quell the threat from the miscreants both on the island and in the water.