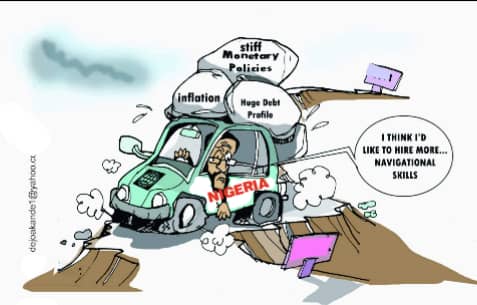 Like a clay-legged giant that could crumble at the slightest push, the maritime industry has been wombling and fumbling through a web of challenges that have over the years slowed its development and stunted its growth.
It is an irony of fate that the  sector which predated the Nigerian nation state, that clocks 60 years, October 1st, 2020, is still struggling among the commity of maritime nations.

Nigeria has the natural attributes to becoming a towering giant among the international maritime community.

With its 853 nautical miles of coastline located on the coastline corridor of Gulf of Guinea and the Bright of Benin, 200 nautical miles of Exclusive Economic Zone, 30,000 kilometres of waterways, comprising of over 50 rivers, with eight out of the 36 states having littoral status coupled with vast and fast growing population estimated at more than 200 million, Nigeria has no reason not to be a force to be reckoned with in the global maritime community.

Sadly, the opposite is the case.

Nigeriamaritime360.com is worried to note that as the country is growing in age, its maritime sector is still struggling to shake off the shackles of sluggish growth.

It has been afflicted by a strange disease that has malnourished and stunted its growth.

Our forefathers had lofty aims of using the maritime industry as a launching pad for economic prosperity when they established institutional structures to drive the dream.

We had a national carrier called Nigerian National Shipping Line (NNSL) which was then the pride of the nation.

Our seafarers, unarguably among the best in the world, were then the toast of the International shipping community, our cargoes, which we had and still have in abundance, were being freighted by Nigerian owned ships.

Nigeria was prosperous; unemployment was negligible as the sector became a veritable ground for employment.

But 60 years down the line, the Nigerian Maritime sector has ingloriously crashed from the pinnacle of glory to the abyss of shame.

These gains had been frittered away on the altar of gross maladministration and incompetence.

The NNSL, which boasted of about 20 vessels, for which Chief Olusegun Obasanjo prides himself as his legacy and which he is still lamenting their loss till today, had packed up. It was liquidated in 1995 with all these vessels gone.

More than 80 percent of our indigenous shipping companies have equally gone under, swept away by the harsh tide of the inclement economic climate.

Our administrators were busy playing politics with the disbursement of the Cabotage Vessel Financing Funds (CVFF), an interventionist programme meant to empower the struggling indigenous ship owners, more than 10 years after it was established.

The effect of this neglect was the preponderance of foreigners who have now taken over the coastal trade, ostensibly reserved for the locals through the instrumentality of the moribund Cabotage law.

Government’s half-hearted attempt to revive the National carrier from its ruins expectedly fell like a pack of cards when the leading investors, Pacific International Lines, (PIL), pulled out of the inglorious deal.

This has further compounded the agony  of the country that has cargo but no vessels to convey them.

Sadly, the implication of this fundamental system failure was that the country would be at the mercy of foreigners who now dictate the terms of trade.

Hassan Bello, the highly cerebral helmsman at the Nigerian Shippers Council sums up the level of decadence to which the maritime industry in the country has degenerated.

“What we have now is a sector dominated by foreign ships and they dictate to us. We have no choice than to listen to them, yet we own the cargoes.

“To correct this anomaly, we should have the ships. No matter how wide or long our coastline is, no matter how long our inland water is, and how our ports are, if we do not have the ships, then we cannot pretend to be a maritime nation.”

In the words of Bello, one of the government administrators in the industry, our claim to having a maritime industry, despite its huge potentials and great natural attributes, is pretentious.

No serious maritime nation that has cargo will allow foreigners to dominate and determine their carriage and freight terms.

That is what Nigeria does, relinquishing its cargoes to foreign vessels because it has none.

Though painful, this is the reality of the situation of the industry, 60 years after independence.

Of equal calamitous proportion is the fact that the manpower in the seafaring industry in the country is endangered.

The seafarers of yore who got their seatime experience on the NNSL vessels are fast ageing with no visible replacement in sight.

Some of them had to resort to public display of their resentment and anger at NIMASA’s slow response to their plight.

Not only that Nigeria has no vessels, it also lacks experienced seafarers who drive maritime industry.

A nation like the Philippines has its seafarers as their national resources who act as a leading source of foreign exchange for the country.

Another flip side of the decadence in the industry is the issue of security.

Nigeria, over the years, has been designated as one of the most dangerous maritime zones whose waters are clustered with dare-devil pirates, kidnappers and other sea robbers, especially at the Gulf of Guinea where Nigeria is a dominant actor.

International reactions to the rot in the Nigerian maritime sector have been varied and poignant.

The issue of lack of secured waters, despite government efforts to reverse the trend, has in different times, earned the country an unenviable sobriquet of ‘war zone’ with the attendant surcharges and high insurance premium.

At another times, foreign vessels divert cargo to the neighbouring countries or restrict their voyage to the Lagos ports, which they consider reasonably safer than their counterparts at the eastern and south- south axis.

The issue of security has become a mechanise for smart private business interests who feast on the uncoordinated efforts of the agencies charged with this responsibility.
The issue of Secured Anchorage Area (SAA) which has become a matter of controversy between the Minister of Transportation, Rotimi Ameachi, the Managing Director of NPA, Hadiza Bala Usman on one hand and OMLS, Nigerian Navy and the National Assembly on the other, was a sad commentary on the descent to ridicule of our security architecture in recent times.
It got to a ridiculous extent that Ameachi has to enlist the support of stakeholders to chase away a private business interest which is making a meal of the lack of security on our waters.
But OMLS is not in a hurry to let go of its meal ticket.

The culmination of this structural deformity in the sector was the loss of the membership of category C of the International Maritime Organisation (IMO) during its elections in 2017.

That loss was a sad reflection of the level of distrust and lack of confidence of the International Maritime community in the nation’s maritime sector.

However, what appears as one of the few bright spots in the otherwise gloomy maritime firmament was the 2006 port concession which tended to breathe some life and a semblance of sanity into terminal operations in the industry.

The exercise translated into the transformation of the terminal operations through massive injection of investments that resulted to efficiency.

That was where the good deeds of the exercise end as it is being bogged down by myriad of problems that have sparked off strident calls for its review.

The concession exercise, rather than lead to cost reduction as was envisaged by those who envisioned it, has resulted to spiral costs due to multiple and arbitrary charges that have made the Nigerian Ports the costliest in the sub- region.

These problems have unfortunately reduced Nigeria to a struggling giant among other competing African countries for a load centre, a status which should have naturally been conferred on the nation as a natural choice for maritime hub centre within the Central and West African sub-region.

The same scenario is replicated in the race among the littoral African states to be a transit point for cargoes meant for landlocked African countries.

Nigeria was once a preferred transit point for this category of cargoes before it lost the status to other more competitive and efficient African countries.

However, this platform still has an implicit confidence in the capacity and potentials of Nigerian Maritime industry not only to be a respected voice in international shipping community but as a leader among its contemporaries in Africa.

We also have an uncommon faith in the ability of the sector to reclaim its lost glory in global maritime business which undoubtedly is capable of rescuing the country from the threatening and incessant economic downturn.

We however urge the government to confront the multi-faceted challenges in the sector with adequate political will, sincerity of purpose, unbending determination and genuine patriotism to rescue this vital sector from its floundering steps.

Nigerian government should take a cue from other developing countries whose governments have used the maritime sector to grow the economy.

The meteoric influence and wealth of such countries like Malaysia, Singapore, India in international maritime business should be a challenge to our government, given the fact that these countries started off with Nigeria as developing economies.

If the various reforms embarked on by the present administration are pursued with vigour and sincerity of purpose, the effects will stir the sleeping giant to action among its contemporaries.
We commend the deep blue  project being championed by NIMASA which we hope will address the malignant security issued in the sector and lead to more safe and secured waters.
In the same veins, if the proposed Customs modernisation exercise is carried out with utmost commitment and sincerity, it will revolutionise cargo documentation and delivery system in the industry.
We urge government to ensure the take-off of the much-touted National Single Window project meant to congregate all critical agencies and players in the sector on one Single platform for seamless and efficient service.
That is why we laud the newly- found synergy among the goverment agencies in the industry aimed at promoting healthy rivalry and harmonisation of their functions and duties.
We also commend the efforts of government to link the ports with rails which we hope will ensure efficiency in cargo delivery.
Efforts should be expedited to disburse the controvesial Cabotage Vessels Financing Funds (CVFF) to empower many indigenous ship owners whose businesses have slumped under the harsh economic condition in the country.
Goverment should also not spare any efforts to create a competent and robust seafarers pool that will take over from the experienced but aging and fast depleting seafarers.
More importantly however, full automation of processes and procedures at the ports must be achieved if Nigerian Maritime industry must attain the desired and deserved leading position in the West and Central African maritime nations.

Until this is done, the industry will continue its laboured and struggling clay-footed pace to achieving greatness and growth.

Chevron denies plan to move Nigerian jobs outside the country.