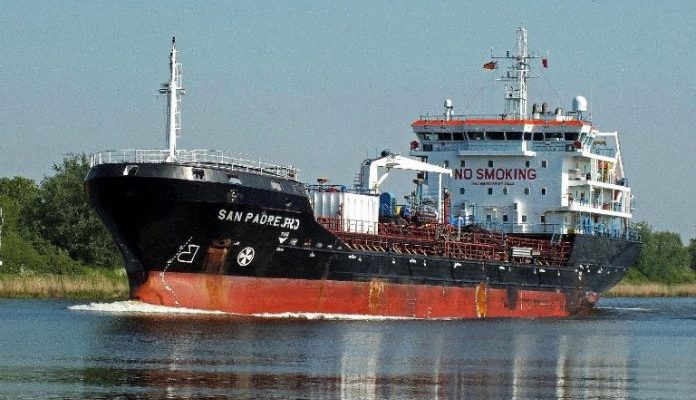 The Federal Government, on Saturday, handed over a Swiss vessel, MT San Padre Pio, which was arrested in 2018, to the Swiss government.

The vessel was arrested within the country’s territorial waters over illegal operations three years ago.

Recall that in January 2018, the Nigerian Navy arrested and detained the vessel laden with 5000MT of AGO along with 16 crew members on board, for operating illegally in the Nigerian territorial waters, without cabotage clearance from the Nigerian Maritime Safety and Administration Agency, NIMASA.

The Nigerian Navy, Forward Operating Base, Bonny, had handed over the vessel and the crew members to the Economic and Financial Crimes Commission, (EFCC) for investigation and prosecution.

The arrest and detention of the vessel almost led to a diplomatic row between the Nigerian government and the Swiss government, which Vice President, Yemi Osinbajo, had to intervene.

Handing over the vessel to the Swiss government on behalf of the Federal Government was the Commander of the Nigerian Navy Ship, NNS Pathfinder, Commodore Abdullahi Ahmed; a representative of the Ministry of Foreign Affairs, Dr Samuel Niyi Ojo, and the Minister of Justice and Attorney General, Abubakar Malami.

Speaking at the event, the Attorney General of the Federation, Abubakar Malami, said the release and handing over of the vessel will further cement the bilateral relationship between Nigeria and Switzerland.

Malami, represented by the Deputy Director, International and Comparative Law, Federal Ministry of Justice, Dr Francis Ojo, said the Ship was arrested for doing ship to ship transfer of AGO and navigating Nigerian waters without relevant permits.

He said: “This process started in January 2018 when MT San Padre Pio was arrested.

“While the Ministry of Justice was deliberating how to release the vessel unconditionally due to the diplomatic relationship between Nigeria and Switzerland, the Swiss government went to the International Tribunal for the Law of the Sea in Germany, on the matter of which the Tribunal ordered Switzerland to enter a bail bond of $14million in favour of Nigeria for the crew members to be released in line with Nigerian laws.

“During this time, the case was also going on at the Federal High Court in Port Harcourt.

“During this process, Vice President Yemi Osinbajo and that of Switzerland met and agreed that the case should be resolved diplomatically due to the bilateral relationship between both countries.

“Negotiations went ahead and on May 20th 2021, an MoU was signed between the Federal Government and Swiss government to release MT San Padre Pio unconditionally and allow it to depart Nigeria without hindrance and that the case at the International Tribunal should be withdrawn and the one in the Nigerian court should be closed.