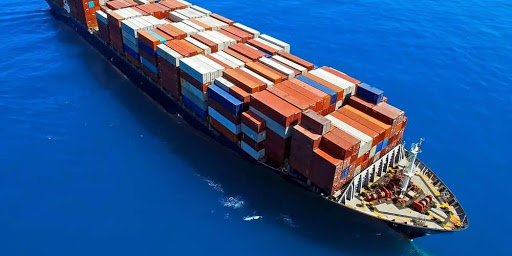 By Otunba Bright
As a result of inability of Nigerians to own ships that are involved in international trade, Nigeria has expended over $45 billion as freight services between 2015 and 2019.
Speaking  at the pubic presentation of the book by Dr. Edmund Chilaka titled: “The Rise, Fall and Liquidation of Africa’s Pioneer Carriers: Nigerian National Shipping Line (NNSL) and Black Star Line,” the Executive Secretary/CEO of the Nigerian Shippers’ Council, Hassan Bello,  who was represented by Deputy Director, Consumer Affairs Department, Akujubi Celestine,  said that foreign ship owners are the real beneficiaries of this money spent as freight because Nigeria do not benefit anything from it.
According to him, it is quite embarrassing that a coastal nation like Nigeria with abundant natural resources and a population of 200 million people, conceded the transportation of its export and import cargoes to foreign carriers ,thereby denying the country the huge economic gains derived from maritime business.
He  said money which could have come to government coffers  was paid as freight for dry and wet cargo to foreign  ship owners by Nigerians between 2015 and 2019 alone, an average of more than $8 billion annual freight Nigerians paid to foreign ship owners.
He explained that the Nigerian Ports Authority statistics, shows between 2015 and 2019, a total 26, 147 vessels berthed at the Nigerian ports with dry cargo throughput of 372,000,000 metric tonnes and total wet cargo throughput of 613,000,000 metric tonnes.
He pointed out that, “If we apply the NIMASA benchmark freight rate of $92.5 per metric tonnes for general dry cargo from Europe, total frieght rate of more than $34 billion was paid for the period while with a benchmark freight rate of $18 per metric tonne for crude oil to Europe, freight paid to foreign ship owners on crude oil export was more than $11 billion for the period,” he added.
He said this was an economic opportunity loss to Nigeria, as the country did not benefit anything as freight from carriage of her cargo  due to absence of Nigerian fleet plying international trade.
There are myriad of challenges that have hampered the development of Nigerian fleet over the years thereby, giving opportunities for foreign  vessels to dominate our shipping trade, according to Bello.
Bello said  that years after the collapse of NNSL, the vacuum created by the demise is still today yet to be filled, saying that the decision to constitute the committee was to avoid the failures and pitfalls of past attempts and address the in balance in the nation’s shipping sector to enable the country play significant role in the carriage of its import and export cargo.
He said the committee is working with relevant government agencies and the private sector in the rejuvenation of indigenous shipping capacity and to accelerate participation in international maritime shipping services.
However, the Author of the book, Dr. Edmund Chilaka said that Nigeria must learn from their past mistakes which led to the collapse of Nigerian National Shipping Line.
He said indigenous ship owners need government support to compete in the international shipping business and call for disbursement of CVFF in the custody of NIMASA.