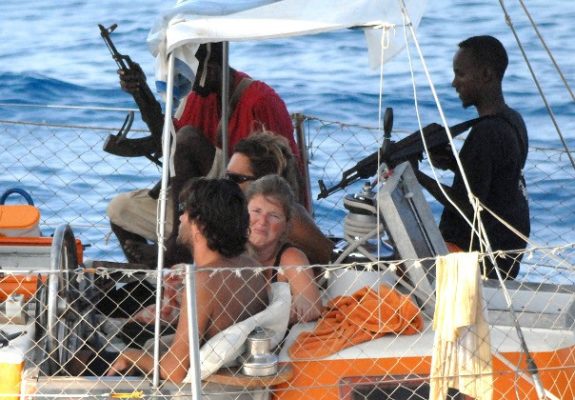 Nigeria and the Inter Regional Coordination Centre (ICC) Yaoundé have formed a forum to galvanise regional and international efforts to ensure security in the Gulf of Guinea (GOG).

Gulf of Guinea Maritime Collaboration Forum (GOG-MCF/SHADE) was floated after meetings between Director-General of the Nigerian Maritime Administration and Safety Agency (NIMASA), Dr Bashir Jamoh, representing Nigeria, and Executive Director of ICC Yaoundé, Admiral Narciso Fastudo Jr.
In a joint statement by NIMASA, the Nigerian Navy, and ICC Yaoundé said GOG-MCF/SHADE, which was purposed to facilitate shared awareness and deconfliction of activities in the Gulf of Guinea, “will be open to all GOG countries with similar capacities to join on a voluntary basis.”
The statement dated April 26, 2021 said, “GOG-MCF/SHADE will focus on counter-piracy and armed robbery by bringing together regional, international, industry and NGO partners to advance and coordinate near term maritime activities with a view to working toward a set of common operational objectives in order to protect seafarers and ships operating off the coast of West and Central Africa.”
Jamoh and Fastudo agreed to hold the first virtual meeting of GOG-MCF/SHADE as soon as practicable, saying modalities would be announced later.
They said due to its complementary nature, the G7++Group of Friends of the Gulf of Guinea (G7++FOGG) would support the creation of GOG-MCF/SHADE, which would comprise an open plenary session; working group meetings; working group chairs, coordination meeting; and a plenary session report.
Jamoh said, “The new maritime security framework speaks to our own integrated approach to security in the country’s waters and the Gulf of Guinea.
“We have always believed in bringing all maritime stakeholders on board in the search for security, and we have proffered that as a solution at various forums with our regional and international partners.
“I am confident that cooperative efforts and shared capabilities are the best approach to success in our collective quest for maritime security.
“GOG-MCF/SHADE is coming as a powerful new force for security in the Gulf of Guinea.”