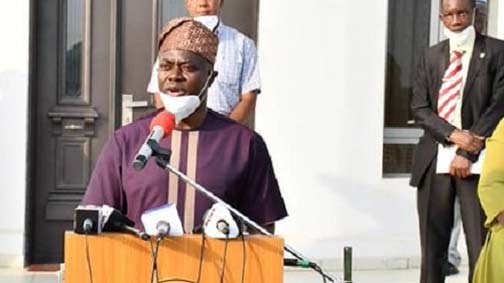 The request for 15 percent equity by the Oyo State government has stalked the construction of the N43.24billion Ibadan Dry Port project.

Speaking over the weekend in a meeting with the Oyo State Governor, Seyi Makinde at the government house, Ibadan on the sidelines of his visit to the Inland dry port site, the Minister of Transportation, Rotimi Ameachi,  said allocation of land for the Ibadan Industrial Park and the Ibadan Dry Port halted the development of the dry port project as the Oyo State government has only made available part of the land required for the projects.

These issues were revealed and straightened when the Minister of Transportation, Hon. Rotimi Amaechi visited the Ibadan Dry Port accompanied by the Oyo State Governor, Engr. Seyi Makinde, yesterday.

While interrogating the Site Manager at the Ibadan IDP in Moniya, Ibadan, the Chinese operator revealed that they were yet to get approvals to utilize certain portions of the land as Oyo State government made available 44 hectares when 90 hectares are required for the project.

Oyo State governor, however, stressed that the state was interested in having a stake in the project as that would ensure the viability of the investment and sustainability irrespective of subsequent changes in administration.

“Has there been any issue here? Why hasn’t there been more development? What are your challenges?” Rotimi Amaechi asked at the IDP which only has a state-of-the-art freight and passenger station.

Meanwhile, the Executive Secretary of Nigerian Shippers’ Council (NSC) Mr. Hassan Bello revealed that the initial request for land was for the dry port which required 44 hectares while the more recent project, industrial park needs an additional 46 hectares.

Amid the land allocation challenges inhibiting the Ibadan Dry Port project in Oyo State, the Minister of Transportation, Amaechi revealed that he declined Ogun State government an opportunity to float a dry port project because of Ibadan IDP.

The Transport Minister revealed this during an engagement with the Oyo State Governor at the State house as he encouraged the Governor to support the project by giving the investors sufficient land.

Amaechi also warned that the port access roads crisis in Lagos may be replicated in Ibadan if the State government doesn’t provide alternative roads for the Impending freight services and IDP.

“In June, the President will commission the rail line and afterwards we intend to route cargoes via that track. Cargoes would begin to come in and that would add pressure to your city because there are no roads to cater for this increase in vehicular activities.

” I told this to the former Governor when we visited last. We should have a link road between the IDP to the Lagos-Ibadan expressway. Even if this IDP wasn’t there, I have advised that if we don’t intend to crash Ibadan down, there should be a road to link the Moniya to the old Ibadan railway. The reason is that the moment trucks start lifting cargoes from Moniya, there would be pressure on the roads leading to the city,” the Minister said.

Amaechi equally stressed the need for sufficient power supply and posited that the issue 15% equity participation by Oyo State government, means Oyo must contribute something to get equity.

“In the IDP in Kaduna, the government didn’t contribute so they didn’t ask for anything. If you want to share in the profit or operations of the business, you would have to take up some responsibilities,” the Minister said.

In his reaction, Governor Makinde said; “We don’t want a grade B or C road connecting Moniya to the city because we have learnt from what happened in Apapa.

” We are looking at top quality infrastructure that would fit into the plan of the inland dry port and prevent the headaches characterized by Apapa gridlock.
“The Chinese company already has a contract to construct the Shaki to Ogbomoso road. We want economies of scale for their projects. We are ready for the project but we want equity because when there are challenges and Oyo state government has equity, the matter will be quickly resolved.”

“This wouldn’t be hampered by a change in administration because the government has a stake. The Ministry has the commitment of the state government on the dry port and we will do everything within our powers to see it become a reality.

“Please don’t talk to Ogun State government anymore about dry ports. In terms of real advantage, Oyo is better because of the location and Abeokuta is too close to Lagos.”

NDLEA seizes over N8bn worth of cocaine at Lagos airport