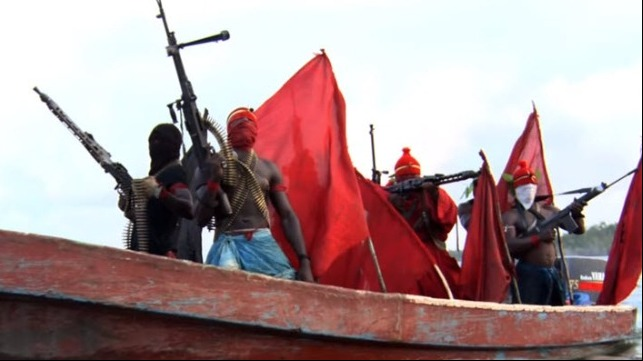 —– as 10 pirates bag 48 years prison sentence.
Nigeria has continued to deplete the rank of pirates in the country as another 10 dare- devil  sea criminals were fell under the onslaught of the Suppression of Piracy and Other Maritime Offences, SPOMO ACT.
This followed the judgement  of a Federal High Court which sat in Lagos yesterday that sentenced ten  pirates to a total  number of 48 years each in prison for hijacking a Chinese fishing vessel, FV Hai Lu Feng II, in May 2020.
Justice Ayokunle Faji convicted the defendants 12 years each on all four counts as charged. The 48 years imprisonment is however to run concurrently.
In addition to each of the convicts spending 12 years behind bars, they would also pay a cumulative fine of N10 million.
The convicts, who reside in Nigeria, are Frank Abaka, Jude Ebaragha, Shina Alolo, Joshua Iwiki, David Akinseye, Ahmed Toyin, Shobajo Saheed, Adekole Philip, Matthew Masi, and Bright Agbedeyi.
They were arraigned in July 2020 by the Office of the Attorney-General of the Federation (AGF) for allegedly hijacking the Chinese vessel in international waters off the coast of Cote D’Ivoire.

They pleaded not guilty and were remanded in the custody of the Nigerian Navy, following which trial commenced.

Delivering his judgment on Friday, Justice Faji said the prosecution proved its case beyond reasonable doubt that the pirates did hijack the vessel, FV Hai Lu Feng II, belonging to Haina fishing company.

Reacting to the landmark judgement, Director General of the Nigerian Maritime Administration and Safety Agency, (NIMASA) , Dr. Bashir Jamoh, said that history has been made,  adding that a huge lacuna has been filled in the battle against maritime crimes in Nigeria and the entire Gulf of Guinea.

According to the DG “ today history has been made, our industry has made a huge leap in the battle to rid our maritime domain of illegalities.

“In the course of the trial, the government told the court that the defendants “while armed with weapons, committed an illegal act of violence against the crew on board FV Hai Lu Feng II belonging to Haina Fishing Company by putting them in fear in order to take control of the vessel.”

Prosecution counsel, Mr Magaji, said they violated Section 3 of Suppression of Piracy and Other Maritime Offences (SPOMO) Act, 2019, punishable under Section 2 of the same Act.

The SPOMO ACT was signed into Law by President Muhammadu Buhari in 2019 which was a major stride in Nigeria’s quest in ensuring prosecution of criminals in the Nigerian maritime domain.