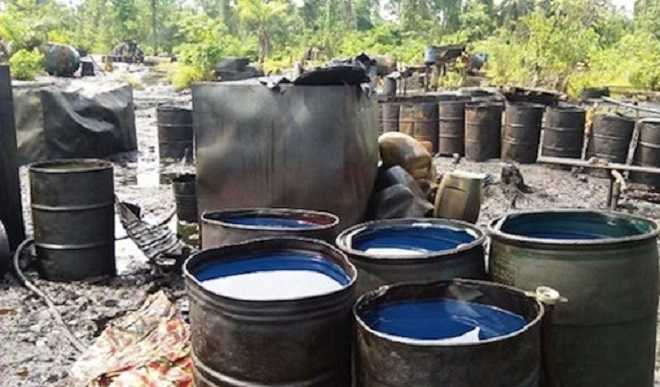 Chinazor Megbolu   |
The Defence Headquarters has said the military has arrested some oil thieves as well as destroyed illegal refineries.
The Coordinator, Defence Media Operations, Major General John Enenche in his weekly report on Friday in Abuja said the military in its aggressive fight against crude oil theft, pipeline vandalism, bunkering, economic saboteurs and other criminal activities in the country, made the arrest and destruction of illegal refineries.
While giving the update, he explained that the Armed Forces of Nigeria carried out the operations between September 12 and September 17, 2020.
Enenche also noted that the military arrested seven suspected oil thieves, discovering barrels of stolen crude oil and destroyed numbers of illegal refineries in the South-South and South-West zones.
“Within the period under review, Nigerian Navy Ship Pathfinder Patrol Team in the South-South located and immobilised an illegal refining site at Mudukiri Creek, Degema Local Government Area of Rivers.
“The site had a metal reservoir laden with an estimated 150,000 litres of illegally refined AGO.
“In the same vein, Forward Operating Base Bonny patrol team discovered and dismantled an illegal refining site in Ataba, Andoni LGA of Rivers.
“The team discovered eight metal storage tanks and four dugout pits laden with about 1,289.45 barrels of product suspected to be stolen crude oil,” Enenche said.
He also pointed out that the Nigerian Navy Ship Jubilee Clearance Operation Team, while acting on credible intelligence on suspected pirates and sea robbers’ camp at Otoyo, Akwa-Ibom, raided the camp.
Enenche hinted that the patrol team overpowered, dislodged and deactivated the camp in the area.
According to him; “the team recovered 1 AK 47 rifle with 2 magazines, 2 Pump Action Rifles, 20 rounds of 7.62 and 39mm ammunition, 1 Fishing Gun, 1 Tecno phone, a bag of hard drugs, 1 diving face mask and one handheld metal detector.
“Between September 12 and September 17, Forward Operating Base Ibaka patrol team around Utan Inyata Creek arrested two suspects and two small-sized wooden boats laden with 165 bags of 50kg of foreign parboiled rice suspected to be smuggled from the Republic of Cameroon”.
He maintained that the items and suspects are presently in custody of the Base and will be handed over to Nigeria Customs Service (NCS) Component of Operation Swift Response for further action.
“Also, within the period under review, Forward Operating Base Ibaka patrol team arrested five suspects with 45 drums of products suspected to be Premium Motor Spirit (PMS).
“The suspects and items are currently in custody and will be handed over to NSCDC Uyo Command for further necessary action,” he said.
Enenche, however, posited that Troops of Operation Awatse in the South West zone, also put spirited effort in the fight against pipeline vandals, economic saboteurs and other criminal elements in the area.
“On September 11, Nigerian Navy Ship Beecroft handed over MT Sea Supply and her crew to the Nigerian Maritime Administrative and Safety Agency (NIMASA) proper documentation in line with the existing Standard Operating Procedure.
He further buttressed by reiterating that the vessel and her crew members were arrested on July 31, 2020 for sailing without obtaining requisite documents.
“On September 12, the patrol team of Forward Operating Base Igbokoda immobilised three illegal refineries containing 30,000 litres of illegally refined AGO at Agbelemsema Zion 2,” Enenche said.

How Your Cars, Generators can use Natural Gas