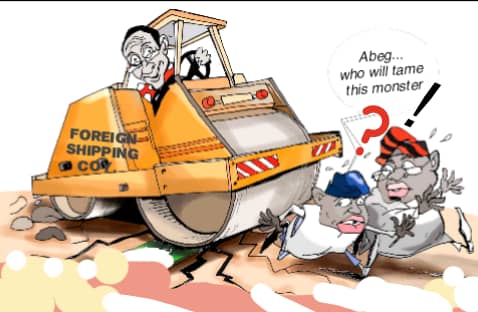 The foreign shipping companies in Nigeria operate with unbridled impunity.

They behave like tin gods who seem to be above the laws.

They treat the guidelines and directives of relevant government agencies, which have the statutory duties to superintendent over their operations, with annoying disdain and disrespect.

Their act of impunity and utter disregard for the constituted authorities is causing pains, hardship and agony to port users.

One of the guidelines which governs their operations but which they have consistently defiled with impunity is the issue of holding bays.

It is part of the critical for their registration.

But sadly, none is known to have complied with this critical criterion.

While some don’t have at all, the holding capacity of what others pass off as holding bays is far less than the numbers of empty containers they generate.

This impunity has therefore led to complications in the management of empties that have compounded the traffic gridlock on the port access roads.

It has also led to unnecessary payment of demurrage by importers who find it difficult to return the empties due to the gridlock.

The matter got to the head in  2018 when truckers had to resort to protest against the flagrant refusal of the shipping companies to establish holding bays to warehouse their empties that were  fingered as the cause of the gridlock.

To restore sanity on the road, NPA directed all the shipping companies to establish their holding bays.

But the companies still shunned the directive which made the NPA slammed a 10-day sanction on four of them which included Maerskline, Cosco Shipping, APS and Lansal.

But few days to the commencement of the sanction, NPA, for undisclosed reasons, hastily lifted the order and watched as the shipping companies continued their impunity and rape of Nigerian importers.

Despite the hues and cries of port users over the agony caused by the littering empties which the shipping companies failed to warehouse in their holding bays, the NPA, which has the statutory powers to check these abuses and excesses, appeared helpless against the powerful foreigners.

This made us to ask who then can tame the monsters which the foreign shipping companies have become?

We shudder at the impunity and arrogance of these foreigners who have gleefully desecrated the guidelines and laws governing their operations in the country.

Not only do they treat the NPA with arrogant levity, they equally look the Nigerian Shippers’ Council, the economic regulator which has the statutory powers to rein them in over their arbitrary charges, in the face with scorn and disdain.

Surprisingly most of the time they, get away with their impunity.

Backed by powerful Nigerians whom they co-opted into their management as either Chairmen or Directors, these foreigners have suspiciously become audacious to continue to play gods while their Nigerian surrogates  provide them with the necessary cover.

But last week, October 10th, 2020, port operators took their destiny in their own hands when the Maritime Workers Union of Nigeria (MWUN) gave the recalcitrant shipping companies a 21-day ultimatum to get holding bays that will suck in the littering empties from the roads or the industry risks their wrath of industrial action.

Ever since this declaration, more groups in the industry have declared their support and readiness to join the fray should the shipping companies fail to comply.

The pronouncement of the maritime workers was not only an indictment on the relevant government agencies for their lack of capacity to tame the monsters but unmistakable  show of loss of confidence in their ability to protect their interests.

We are perplexed at the growing menace these foreigners have become in their operations in the country.

It is unfortunate that they are being encouraged and goaded by the unpatriotic attitude of their Nigerian godfathers whose odious influence has emboldened this misconduct.

We are saddened by the seeming arrogance of the shipping companies and their flagrant disregard for the rules of engagement.

Against international best practices, the shipping companies have turned the country into a dumping ground for empty, sometimes, expired containers.

We are more shocked by the revelation of the maritime workers Union that the foreign shipping companies have turned the roads to their holding bays as they converted the trucks to the bays which are parked along the roads.

It is more disgusting to note that the NPA is aware of this unorthodox practice which is totally alien to international best practices.

According to all the known norms, shipping companies, which own these containers, are supposed to take them back to the ports of origin after they are unstuffed at their countries of destinations.

We note that they have dubiously devised means of recovering the cost of the boxes through various indiscriminate charges, including containers deposits, which is supposed to be refundable after they are returned.

But they frustrate all attempts of importers to return the containers who invariably forfeit such deposits.

With this snobbish attitude of shipping companies and lack of will power of relevant government agencies to enforce the guidelines on handling empty containers, the country has become a dumping site.

We are worried that if nothing is done to tackle this menace, the perennial traffic gridlock at the ports will become a perpetuity, notwithstanding the state of the roads, even if they are paved with glass.

We want to implore the NPA to muster enough political will power to take on these shipping companies and compel them to play the game by the rules.

Firstly, NPA should not back down on the need for these service providers to get holding bays where they could warehouse the containers.

Secondly, the agency should not compromise on its position that no empty container that does not originate from the holding bay will be allowed access into the port.

We are convinced that if these directives are strictly enforced, the menace of the empty containers on the port access roads will be curtailed.

Another measure to tackle the menace is to co-opt bonded terminals operators into the management of empty containers .

Most bonded terminals are presently unviable .

While some had packed up, those that are yet to go under are living on the throes of death.

Except for very few ones that are struggling to survive, majority are barely existing.

Their services became dispensable following the port concession programme of 2006 which took away their business and relevance.

Prior to that time, they became a child of necessity nurtured and sustained by the inefficiency of the NPA.

Now that terminal operations have been conceded to private players, the operators of the moribund bonded terminals are looking for means of survival.

Our recommendation is that the recalcitrant shipping companies could out-source holding bay services to the bonded terminals operators who, to our mind, are looking for a life line to stay afloat.

Since the shipping companies are not attracted to owing holding bays despite the directive of NPA, obviously due to the running costs, this function could be given to bonded terminals operators whose facilities are under utilised under a mutually agreed business partnership.

This partnership could be facilitated by the NPA which could act as unbiased umpire to ensure its success.

If this is done, we believe it will also take away most of the stranded empty containers which are causing confusion on the port access roads.

Another measure, which may appear drastic but feasible is for the Nigerian Shippers’ Council to compel the shipping companies to scrap the dubious and controversial containers deposits.

We believe that it was this deposit that allows the shipping companies to abandon their containers with the importers, knowing fully well that it has cover the costs.

So they would not want to be bothered with the extra costs of owning and maintaining holding bays.

But we are sure that if this exploitative fee is abolished, which is by no means an easy  task, shipping companies will be eager to take back their boxes.

We must however warn that the Shippers’ Council should expect a tough battle and resistance from the service providers, but it is worth trying.

Our passion is to see all the encumbrances in cargo delivery system are removed which to us, will not only engender quick clearance and evacuation of goods but enhance quick turn-around of vessels that will boost port efficiency.

It is only when these foreign shipping companies are tamed and made to play by the rules that normalcy will return to the port access roads, notwithstanding the efforts of government to fix these roads.